Ford is back with a small hot-hatch, the Ford Fiesta ST; it has the same technologies as the Focus ST. It is added to the faclifted Fiesta lineup with 17-inch alloys, aggressive looks with a new grill and integrated body kit.

Ford’s ST credentials have been well established with the Focus and much has been used in developing the Fiesta ST. Ford has included the EcoBoost engine with a manual transmission which makes the whole package smaller, lighter and therefore more nimble. They have also tweaked the steering, suspension, brakes and stability control to give it real exciting drive factor.

It has what you would expect in the IT and connectivity department with Ford SYNC, Bluetooth, Voice Control, Cruise Control, Sat-Nav and a USB connection.

However the key feature is its superb 1.6-litre turbocharged four-cylinder EcoBoost engine. This is lightweight aluminum, direct fuel injection and a twin-scroll turbo. The power of this engine is rated at 147kW, some figures show it at 132kW, but it has an over-boost function enabling the higher rating. 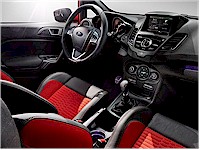 Handling feels like it comes from its world rally pedigree, as the road holding is exemplary, the whole package feels tight and firm but securely in place. The Fiesta ST is so well connected and poised, that it’s a breeze to drive on open roads or around town.

There are waiting lists in Europe so expect the same when the Ford Fiesta ST arrives in this part of the world. It’s due here some time around August 2013. 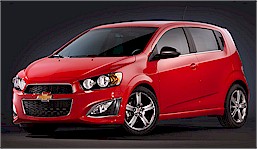 Holden looks set to introduce a Hot-Hatch to its Barina line-up. It based on the all-American Chevrolet Sonic RS and it’s due to be offered to our market some time this year. The all-new Chevrolet-sourced Barina RS enjoyed strong debut sales in Australia in late last year. It sold 1,283 vehicles giving Barina its best monthly result in Australia since February 2008. Barina was the third-highest-selling light car in Australia behind the Toyota Yaris and Mazda2.

The Chevrolet Sonic RS has been around since late 2012 and has a 1.4-litre turbocharged petrol engine same as the Holden Cruze. It produces 103kW of power and 200Nm of torque, and should propel the RS from 0-100km/h in around 7.5 seconds. 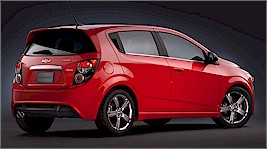 The Barina RS is offered with either a six-speed manual or six-speed automatic transmission, both of which have revised gear ratios for a sportier driving experience. 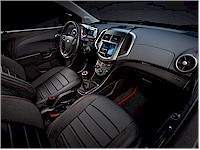