Home > Customer Service > News Updates > 2013 Articles > Ford & GM Get Together Pt 2
Ford and GM were opening up to app developers at the recent 2013 Consumer Electronics Show in January. The trend for the car-oriented technology currently is the opening up of the car dashboard to app developers.

Ford and GM have surprised the automotive and technology worlds by announcing developer programs for their in-car software platforms, essentially replicating the ecosystem of the smartphone into the car dashboard.

Ford already possesses about 20 apps integrated with its Sync AppLink system, with about nine new apps announced at the show. GM is a little more behind in the dashboard app game, but the open development program should give it some impetus.

This is all designed to encourage developers to adapt existing apps or come up with new apps for use in the car. GM was particularly keen on having developers take advantage of some of the vehicle information it makes available through its app framework, such as fuel levels and vehicle speeds.

While Ford already had its Sync AppLink system, GM launched its own app framework at the show, a platform that will support its MyLink and IntelliLink branded systems.

Ford had already been working with developers to some degree, offering up APIs that let apps take advantage of Sync AppLink's advanced voice command features and touch-screen interface. GM is also letting developers at its APIs, so apps can make use of the vehicle's interface options.

Despite the open nature of development, both Ford and GM retain final approval authority for any apps, so they can ensure that the functions are safe to use in a car. Ford came out and said it would not permit apps for games or video in Sync AppLink. 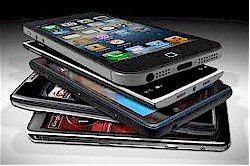 Although we can expect a smaller number of apps for the car than for a device like a smart phone, that potential number grows very large when you consider that there are currently more than 700,000 apps in the iTunes store. Cars in the near future seem likely to let drivers install apps in the dashboard for a variety of uses. Similar to using a smartphone, you might have your favorite apps to load up when you get a new car and then explore more options.    (Image 2A).

A particularly useful app may even influence car buyers toward a model that supports it.
It might seem silly to duplicate the app infrastructure currently found on smartphones, yet making apps native to the car offers some advantages.

Smartphones are not made to be used while driving so automakers are loath to fully integrate a smartphone interface into a car dashboard because they would have no control over how it would be used. They could face liability issues if a driver got into an accident while playing a game, as an example.

Second, the car's dashboard, even with an embedded touch screen, is designed for driving. Touch screens in the dashboard are typically larger than those on smartphones, and automakers have full control over the interface design. Voice command systems can be designed to work with the car, and buttons mounted on the steering wheel let drivers operate technology features while keeping control.

Finally, an in-car app system can take advantage of vehicle data not available to a smartphone. Trip apps could help drivers save fuel by calculating long-term fuel efficiency and help in efficient driving techniques. Performance apps could be fun for track day enthusiasts, and even link to online competition ladders.

As only these two automakers announced open app developer programs, it might seem premature to call this a trend. However, GM and Ford together sold almost 15% of the world's cars last year. GM was the top seller, over all other automakers, while Ford was in sixth place. That sheer volume suggests other automakers will need to look at launching their own programs, if they want to remain in the game.

To help head off complaints from developers having to build apps for a many different automotive platforms, Ford took the unexpected step of saying it would let other automakers use its Sync AppLink platform, free of charge.