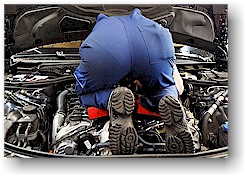 Are you bewildered by simple car maintenance?


It seems a few things have changed over the years especially relating to cars that we drive today.

There was a time when we fixed and maintained our cars a lot of the time without a visit to the local garage. However you have to say that the cars of 30 – 40 years ago were pretty awful. No lights, no brakes, no power, no handling, no comfort, no audio, no iPod connection, no computers, no blue tooth, no seat belts, no fuel injection, no air con, no central locking, no GPS, do I need to go on?

We have been reading lately that cars are becoming more and more complex and so fixing your car is becoming more and more difficult and of course expensive. Many manufacturers are trying to fit so much technology into their vehicles that there is no room left under the bonnet. A spokesman for one manufacturer admitted that because safety is the number one priority it could be difficult for drivers to change a headlamp bulb or bulbs on their car. The result ends up that labour costs will be 10 times the price of the bulb.

So today cars are more like computers on wheels and the do-it-yourself repairs are now becoming a distant memory. According to research carried out by Warranty Direct, they point to the problem being that cars are now way more complex and reliant on technology. An example sited was changing a headlamp on a Renault Clio that now takes a professional mechanic 1.5 hours. A Ford Fiesta for the same task will take half an hour, while a professional mechanic needs over half an hour to change the car’s engine oil and oil filter. 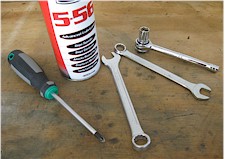 The days of changing oil, fitting a new filter and replacing light bulbs at home are over for most of us. Car owners are now asking automotive garages to do the work for them as the new more complex technologies mean it becomes to tricky to do it your self.

Looking back, we found information that in 1994 it took 10 minutes to change the headlamp on an Audi A4 and the bulb cost under $20.00. Today on the equivalent 2013 Audi A4 model, it’s not only the bulb which has to be replaced, but the whole light cluster, costing more than $150.00 plus the 45 minutes the mechanic needs to do the job at $100.00 per hour. The change started with sealed beam systems, which means you can’t even get into the lamp anyway.

Last year a survey by the AA in Britain talked about the level of ignorance of today’s motorist. It reported that almost seven drivers out of 10 did not know how to check the engine’s oil level, while one driver in 10 did not even know how to open the car bonnet. 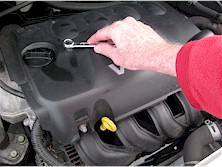 They found that 9% of their members had put off even the simplest tasks such as replacing blown bulbs or wiper blades, while more than one in four drivers do not carry out the most basic checks with oil, water and tyres.

We think doing basic regular preventive checks is something we should all do and is certainly a better option than doing nothing at all. All of this demonstrates that things have become quite advanced. We have gone from a very basic piece of machinery to something that is very sophisticated and driven by technology.

You might not be able to change the fan belt yourself, but the upside is you are less likely to have to do so in the first place. Anyway who wants to go back to those cars of yesteryear?