You have to look at this story in relation to the change in policy coming from companies like Ford and General Motors. They both see the future for the car industry with a global approach to development, manufacturing and marketing. Ford has their “One Ford” vision and GM talks about being a Global Company.

However the Australian government wants to protect the skilled manufacturing base that it has with the automotive industry and this is one way to diversify its economy outside the mining sector. So in August 2013 the Australian Government have announced that it will hand over 500 Million dollars to the automotive manufactures to help the local car industry survive beyond 2020.

The current government is saying that this additional support will be continuing after 2020 and will be reviewed every five years. It’s insisting that this plan will be locked in place by legislation to give confidence to Australia’s local carmakers and their American parent companies. Of course this goes beyond the carmakers, it has a flow on affect to the automotive suppliers and will benefit automotive part producers, tooling, design, engineering and even some non-automotive companies. 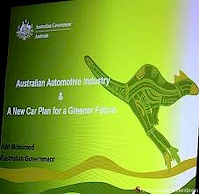 Some reports are saying that the Australian governments “New Car Plan” for the 2020’s will be funded with current allocations so new funds won’t be required until after 2018.

This new funding and will be in addition to the $200 plus million pledged earlier. The plan here was to ease the pain of its proposed changes to the fringe benefits tax system.

The chairman and managing director of Holden said that the company would wait for the 7 September Australian election result before announcing its future manufacturing plans.

Holden workers recently agreed to a revised employment contract, which included a 36-month pay freeze designed to help protect its local car manufacturing for the times ahead. Currently there are three main car companies that manufacture cars in Australia.
1. GM-Holden
2. Ford Australia
3. Toyota

Back in March 2012, Holden was given a cash lifeline by the Australian government and in return, Holden promised to invest more than $1 billion into its car manufacturing in Australia. Holden estimates this investment package should return around $4 billion to the Australian economy and will help GM Holden continue making cars in Australia up to 2022.

Mitsubishi Motors was manufacturing cars in Australia but ceased production back in 2008. Ford has two factories that are located in Victoria but both plants will be closed by October 2016. Toyota has all it’s manufacturing at Altona a western suburb of Melbourne, Victoria.

Well to sum it all up you have to say that the long-term future doesn’t look that great. It’s a difficult mix when you need to rely on taxpayer funding to keep an industry going.

With both Ford and GM both wanting to design, manufacture and market cars on a global front its hard to see where a small localized industry can survive.

With the costs to import and sell vehicles less than the price to do it locally, why would you continue?