Maybe Ford could take the best from the Aussie Falcon, merge it with the best of the American Taurus and come up with a new Taurcon “Global Vehicle”. Somehow we doubt it!

The main issue around the Australian manufactured Ford Falcon is that it is considered by the suits at head office in Detroit to be a regional renegade, missing any global benefits. (The brother that’s left home never to return.)

Since Ford Australia announced that they are due to stop local manufacturing after 2016 the question has risen, will there be life after Falcon?

The focus is now on its American brother, the Taurus.

The Falcon and the Taurus do share the same family name, but the Taurus is a Ford “Global Vehicle” and comes under the “One Ford” banner.

The jury is still out on whether Ford will ship in the Taurus as a straight replacement or commission a new Australian made Falcon replacement based on the Taurus platform. Ford doesn't plan to reveal that decision until 2014.

We have spotted some interesting judgments coming out about the Taurus when compared against the Falcon. (Remember these cars hardly ever compete or compare in the same market).

In a test of the American Ford Taurus, Aussie Steve Colquhoun of Fairfax Media wrote:
“Our all-too-brief time with a Taurus Limited model on a short, sweeping loop of Ford's proving ground wasn't enough to draw too many concrete conclusions, apart from one: that the Australian-designed, built and engineered Ford Falcon remains the better car in most respects”.

We have done a comparison of some key specifications and apart from the front verses the rear wheel drive thing there’s not much that’s too different.

At first sight the Taurus has some striking good looks that do impress but in reality it’s not really a step up from the Falcon. The Taurus engine is quick to answer but does lack the Falcon's straight 6 engine response and sound under hard acceleration.

Reviews are saying, the Falcon's steering has a firmer and more reassured feel. The steering in the Taurus has been criticised for being too light and flimsy, even at low turn speeds. However the American car does win back a few points, according to those same reviews, with a classy interior, instruments and general layout. Taken as a package, it looks and feels more expensive than the Falcon. 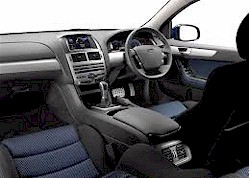 The Taurus does have a slightly larger boot but a little less legroom in the back. Looks are always individual so that’s best left to your own opinion. In summary the Taurus wins on a few fronts, primarily the interior with its high-tech gadgetry and layout, but the Falcon does score points with its muscle, better drivability and superior steering.

By the way there’s no V8 version of the Taurus, so what will take the Falcon’s place after 2016 in the V8 Super Car Racing. Will it be the famous Ford Mustang?