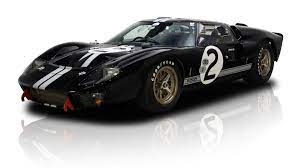 You can’t go for too long without having a reminder of the famous Ford GT 40 first born way back in the 1960’s.

A couple of years ago Ford celebrated the return of the GT 40 with an inclusion in the 24 Hours of Le Mans endurance race by presenting the GT Mk 2 supercar. It was a highly limited, a no-limitations track beast of which just 45 were built, each with a starting price of $1.2 million U.S. dollars.

It was a car that was as fast as any GT3 car, however, you couldn't drive it on any public roads.

Upgrades inspired by that car, could be coming to the final series of a road-legal Ford GT. That’s according to information by MuscleCarsAndTrucks based on recent photos of a GT prototype posted on a Ford Facebook group.

When asked about the GT prototype, Ford simply said the vehicle is not part of the Ford Motor Company’s property.

However, that doesn’t mean it’s not related to Ford as they are partnering with the Canadian company Multimatic to produce the GT supercar.

According to current information, the test car had a hood scoop and fender extractor vents very similar to those seen on the GT Mk 2, as well as visual enhancements inspired by the GT Studio Collection Edition.

For those hoping to see the track-only supercar’s wing on a road-legal version of the GT, it seems that this would be a bit too extreme for Ford.

There’s no word on whether the aerodynamic and visual upgrades will be complemented by performance upgrades under the hood, though MC&T says that it’s possible.

The most powerful production car Ford has ever built is the 2021 Ford Mustang Shelby GT500 with 760 horsepower or 567kW, and it’ll be interesting to see whether the GT send-off model could top that number.

Compared to the Ford GT Mk 2, the final series of road-legal GTs will obviously have a very different role and function. This was a track only vehicle and was answering the question of how the car would perform with all its limitations lifted.

The question many may ask, would you have one of these over a McLaren Senna GTR? Or perhaps more importantly, is there much point in a car like this other than, it looks so cool.