We mean it could be, we’ve been hearing rumours for some time about Ford’s plans to cram in a 5.0L V8 inside the F-150 Raptor’s engine bay, and now it appears there are more rumours surfacing about the Ranger Raptor ending up with the same treatment.

We have been used to the 2.0L/3.2L, 4 and 5-cylinder Ranger diesel engine producing a healthy amount of kilowatt power with stacks of torque for some time now.

A new report coming out of an Australian car magazine is reporting that Ford’s Australian arm may switch out that turbo diesel for the 5.0L V8 Mustang engine. 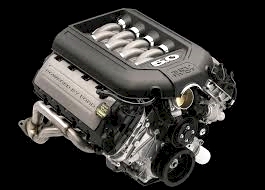 One challenge that Ford would face is that they will need a lot of retooling and effort to make the switch work for a model that may not generate massive sales in Australia or New Zealand.

Adding to the existing rumour is that Ford is supposed to be farming out this project to an external engineering company. The V8-powered Ranger would start off in life as a regular diesel Ranger Raptor before heading to Australia where it’ll be given the heart transplant taken from the famous Ford Mustang GT.

There has been no guess at what sort of production numbers would be available here or in Australia but it’s believed the new engine will produce just about the same power as it does in the Ford Mustang GT. That would be like, 340kW and 556 Nm of power and torque. Which would more than double the regular Ranger Raptor’s power and also boost torque by a significant amount.

We found this comment below, words altered to combine a number of comments, (highlighted in red) which we thought represented what a lot of Australian and New Zealand Ford Ranger fans would say in reaction to this possibility.

“A lot of us love a car with some grunt and this vehicle would sell like hot cakes as long as its priced correctly. It would be very surprising if Ford can't shift thousands a year considering other V8’s sell very well. It'll be interesting to see if it's available in both the normal Ranger and the up-speced Raptor. Bring it on, never too late”!