Home > Customer Service > News Updates > 2019 Articles > Rivian
Ford have beaten General Motors to the punch by taking a $758 million investment in Rivian an EV Company in the US. The agreement Ford made permits Rivian to deal with other automotive companies as opposed to GM wanting exclusive rights. 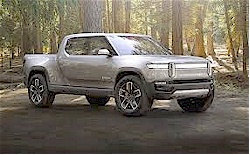 Rivian is a new American based electric vehicle manufacturer that is coming out with the first of two Electric Adventure vehicles for the recreational market.

In some way, this is a clever move that will see them jump ahead of Tesla mainly in the Ute market that is proving so popular with everyone. Full time production is planned for Australia and maybe New Zealand before 2022.

The Ute is named the Rivian R1T, a fully electric, full sized vehicle with a range of over 640km and have a quad-motor AWD system.

The new Ute will be followed by a fully electric SUV named the Rivian R1S. The SUV will be built on the same platform with the same electric motors and have similar performance.

The word from Rivian’s CEO goes like this: We are bringing two vehicles to the market with new thinking for the Ute and SUV sector. He went on to explain that they have started with a clean sheet and had spent years developing this technology to deliver the ideal vehicle for the active customer. This would be achieved with great driving dynamics to handle any surface and carry any type of gear.

The Ute and SUV will be built on what Rivian calls their skateboard platform. That means that the battery pack, electric motors, suspension, braking and thermal system are all positioned below the height of the wheels.

Both of these models will also feature a newly developed quad-motor system with 147kW of power to each wheel that delivers a 0 – 100 km/h time of 3 seconds. The electric powertrain and chassis enable a payload of 800Kg and a tow rating of 5,000Kg’s with a kerb weight of 2670Kg. 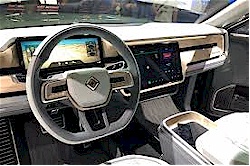 The new Ute will feature some of the latest self-driving technology, including camera, lidar, (a method that measures distance to a target by illuminating the target with pulsed laser light), radar, ultrasonic and a high-precision GPS coupled with high-definition maps.

Pricing for the Ute will start at nearly NZ$91K. Production is due to start in late 2020 at the company’s plant in Illinois USA.