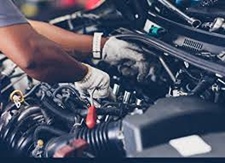 Jim Farley is the new company executive guy at Ford who likes being dressed in jeans and T-shirt, spending his spare time in the garage working on a classic Mustang or a vintage motorcycle.

They say he respects people who wear oil-stained overalls, bruised knuckles and grease under finger nails. He appreciates people who can do engine or body work because that’s how he paid his way through higher education.

When Jim was 5 years old, he was being trained by his grandfather Emmet Tracy, an early employee of company founder Henry Ford, who went on to run an auto parts business and a car dealership.

Emmet would sit down with a stack of automotive books when Jim visited during the Christmas and summer breaks. The two would drive past the Packard Plant, the Ford Plant and the Rouge Plant, where his grandfather worked.

While still at school he took summer jobs rebuilding car engines, locating second-hand parts, like power steering pumps and brake shoes to get the vehicle going.

In 1976, he had saved enough to buy an old black 1966 Mustang with a blown motor, he had the car towed to a garage and worked on it for the rest of the summer.

Jim is now the man assigned to guide the Ford Motor Company into the future. 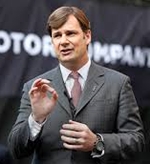 After earning degrees in economics and computer science at Georgetown University and an MBA at UCLA in 1990, Farley scored job offers from Ford, General Motors and Toyota. At Ford, he would have concentrated on just one aspect of the F-Series truck. Toyota offered him the chance to focus on the whole car, specifically the launch of a new luxury brand no one had heard of at that stage called Lexus and that started his career in the auto industry.

Currently some of his fellow employees at Ford complain that he refuses to assimilate to the company culture. They say they don't like that he doesn't really blend in.

But he wasn’t hired to blend in but rather to work his magic. Jim lives alone in an apartment near in downtown Detroit while his family is based in London. His apartment is filled with images of old cars and motorcycles and a huge library of all kinds of books.

As for the future of the car industry, Farley says that cars versus AV’s (autonomous vehicles) presents a false choice. He sees driverless cars as an important commuter solution for those who lack mass transit options, or single parents who can’t leave work to drive their children to school or after school activities, older people needing to get to a medical appointment or to the local shops and people who want their freedom but have never learnt to drive.