Looks like there’s a new Ford Transit Custom Plug-in Hybrid coming to the European market in next year.

It will be a range-extended commercial EV, despite it being a plug-in hybrid.

The Transit will have a 93kW electric motor driving the front wheels. Once the 13.6kWh lithium-ion battery pack is fully charged, the Transit Custom PHEV has a pure-electric driving range using the older NEDC standard of around 56 kilometres.

It also comes fitted with a 1.0L turbocharged three-cylinder petrol engine and it’s only there really to recharge the battery pack. The total drive range with a full battery and tank of petrol is supposed to be about 500Ks.

Recharging time using a 240V 10-amp power supply, like you would find in most households is reported to be just over 4 hours, well maybe.

There will be four selectable drive modes;

Standard features on the new Transit EV will include a new instrumentation cluster with real-time energy display, a heated windscreen and air conditioning.

Other options will include 12V E-power pack, which allows power tools, lights and other equipment to be run using energy from the van's lithium-ion battery and can deliver up to 6kW of power. 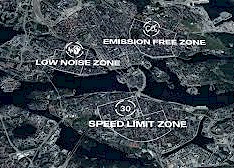 From the second quarter of next year, the Transit EV will also be available with a geo-fencing module, which switches the car automatically to an EV mode whenever it enters a low-emissions zone.

Production of the Transit Custom PHEV begins late this year. Ford of Europe will begin accepting orders sometime in late 2019.

Ford Australia says it has nothing to say, regarding the local introduction of the new electrified Transit vans. We guess the same will be true for New Zealand.