Home > Customer Service > News Updates > 2019 Articles > No ordinary Ford Cortina!
Have you heard about the 1966 Lotus Cortina that is predicted to set a world record at auction in Birmingham England of around £200,000? By the time you are reading this article it will have gone under the hammer in January. 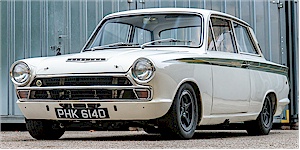 It is forecast to beat the current record figure paid for a Cortina which stands at £191,900 (over $300K). This car has some great race car history with drivers like Jim Clark, Graham Hill and Jackie Ickx.

This car is one of only three Group 5 works Cortina’s built by Lotus for the 1966 British Saloon Championship, it was built in March 1966 and immediately assigned to the current reigning F1 champion Jim Clark.

It went on to be raced throughout the 1966 season by other F1 drivers Peter Arundell and Jacky Ickx, who then drove the car to second in class at Snetterton, Goodwood and Silverstone racetracks.

In June 1966, its 4-cylinder 1.6L petrol engine was updated to petrol injection by BRM before racing at Brands Hatch in the Grand Prix support race, where it achieved first in class, finishing in forth position overall. 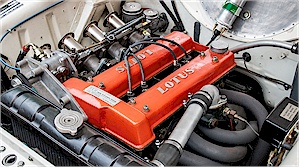 The Cortina went on to achieve more podiums and victories later that year. Then in 1967 the car appeared in its last works event, finishing its Team Lotus career on a high with Graham Hill taking it to first in class and second overall in the Race of Champions - again at Brands Hatch.

With more competitive finishes for this Ford Lotus Cortina in 1967 and 1968, the car spent some time in Africa until it was returned to the UK still in its authentic condition following a sensitive restoration, and still retains its original shell and all the period race modifications to the suspension and the engine.

It's accompanied by the full details of its works competition history in 1966, 1967 and 1968 as well as a small number of spares.