Statistics released in Australia for the first third of 2018 are pointing towards passenger vehicles in sharp decline. The Holden Commodore has been the highest profile loser this year, but others in the market have contributed to the decline.

This is despite vehicle sales hitting record levels both in Australia and New Zealand for 2017 and 2018 so far. 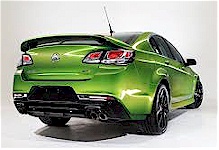 You could sheet the blame for the sales slump on Holden’s transition from the Australian built VF II Commodore to the imported ZB model, but almost every other passenger vehicle has contributed as well.

Contributing to record sales is the SUV and light-commercial-vehicles flying out of the showroom doors with mini and small vehicles still just holding on.

The passenger vehicles to lose the most ground are; Ford’s Mondeo, the Honda Accord, the Kia Optima, the Mazda6, the Subaru Levorg & Liberty, the Volkswagen Passat and the Toyota Camry.

The higher priced passenger vehicles made by Audi, BMW, Infiniti, Jaguar, Lexus, Mercedes-Benz and Volvo are also not exempt.

None of these vehicle makes mentioned are failures but each passenger vehicle respective sales decline tells a different story. It relates to the further fragmentation of the market place and buyers changing taste.

SUVs are on the rise and vehicles like the Ranger and Colorado and similar are now killing off passenger vehicles sales at an alarming rate.

There’s no pass for sports cars either, vehicles selling below the $90K mark, like the Mustang, Cascada, Veloster, MX-5 and Toyota 86 have dropped in sales volumes in Australia according to reports we are seeing, along with vehicles like the BMW 4 Series, Z4, Infiniti Q60, Jaguar F-TYPE, Mercedes C-Class coupe and many others as well.

People would rather buy SUVs or LCVs than traditional sedans, hatches, wagons, coupes and convertibles. The market dynamic has been altered by the SUV but vehicle manufactures have adapted quickly to that change and new products are coming into view as fast as can be managed.
The ten top selling brands in Australia for the first third of 2018 were: July 2018