Home > Customer Service > News Updates > 2018 Articles > Skyactiv-X
Here comes a possible game changer from Mazda, who have been focusing on a new Internal Combustion Engine (ICE) rather than developing an Electrical Vehicle (EV). It’s a world first and it’s called the Skyactiv-X.

Mazda has been developing this Homogeneous Charge Compression Ignition (HCCI) petrol engine and the technology behind this is to combust ultra-lean petrol/air mixtures for huge efficiency gains and lower emissions but everyone so far has found it too volatile and difficult to manage.

A HCCI engine will use a higher compression ratio to achieve ignition without a spark plug but use a spark for the lower compression. That requires exact control over the petrol/air mixtures and temperatures inside each cylinder so the engine can transition between lean and rich ignition.

Mazda’s thinking is that until the quality of electrical power production changes to renewables from brown coal, EV’s will not contribute to greenhouse gas reductions. Although the EV doesn’t emit pollution, the power station that produces the electricity certainly does.

Global figures demonstrate that two thirds of the worlds electricity is generated using fossil fuels so to believe that EV’s produce zero emissions is disingenuous. 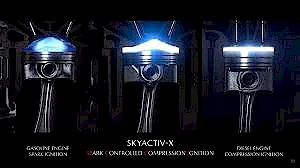 Mazda talk about an emission measurement system that is more honest, they call it “Well to Wheel” which takes into account fossil fuel extraction, manufacturing and shipping.

For example, a mid-sized EV will consume about 20 kilowatt-hours of electricity per 100km and production of this power from a coal powered station translates to CO2 emissions of 200g/km.

For the same sized vehicle, petrol will produce emissions of 153g/km and LPG is down as low as 100g/km. Mazda are saying that their Skyactiv-X will rate at about 143g/km. 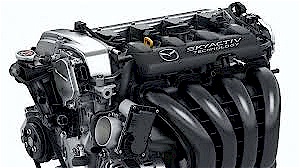 When operating with compression ignition (CI - no spark), Skyactiv-X combines air and petrol during the intake stroke as it does during spark ignition, only much leaner but then injects a second amount of fuel just before the power stroke and ignites it using the spark plug.

The flame created spreads out and down while also raising the cylinder pressure high enough along with the compression from the piston to combust the lean primary petrol/air mixture.

A small supercharger further expands the CI operating window by feeding more air into the engine, leaning out the mixture sufficiently for compression ignition even at higher engine speeds.

In summary, Mazda are saying you get increased efficiency across a wide range of rpm and engine loads giving you superior fuel economy, lower emissions and increased performance.