Home > Customer Service > News Updates > 2018 Articles > A New Car Movie
The year was 1965 and the date was 19/20 June, the 24 Hour Le Mans endurance sports car race was in its 33rd year. It was also the twelfth round of the World Sportscar Championship and after the disappointing results of the previous year’s race, Ford was returning with an improved version of its GT.

There were 11 Fords or Ford-powered cars in the field and to meet that challenge Ferrari had no less than 12 of their cars. Porsche had dominated the medium-engine category with seven cars and Alpine-Renault likewise dominated the small-engine categories with six entries.

Despite a strong start, in the end, Fords’ unreliability let them down and it was another easy victory for Ferrari. 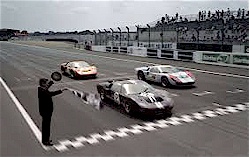 This is the year that Ford made history by taking the first 3 podium places at Le Mans with first place going to the Shelby American Team with the drivers, Bruce McLaren and Chris Amon.

Second over the line in the same team was Ken Miles and Denny Hulme and third from the Holman & Moody team were Ronnie Bucknum and Dick Hutcherson.

This will be the backdrop of a new movie coming out soon that will feature Matt Damon will portraying Carroll Shelby focusing on the sports car battles between Ferrari and Ford in the 1960s, while Christian Bale is to portray the Ford GT40 test driver Ken Miles.

Ferrari won at Le Mans every year from 1960 to 1965, but Henry Ford II, furious at being spurned by Enzo Ferrari when he thought he had a deal to buy the Italian sports car firm, was triggered into commissioning a car to beat the red machines with a prancing horse at the famous track at Le Mans in France.

Rumour back in February 2018 was reporting that Damon had been asked about the role of playing Shelby, who after co-driving in the 1959 Le Mans winning Aston Martin with Roy Salvadori, became one of the iconic names in Ford’s sporting history, thanks to his work at turning the AC Ace, Cobra and Ford Mustang into Ford-powered muscle cars, and running the American-entered GT40s at Le Mans.

The film will be written and directed by James Mangold, who has CopLand, Walk the Line and the 2007 remake of 3:10 to Yuma in his résumé. For all the car people, this should be something to look forward to at your local picture theatre so keep an eye out for this coming soon.