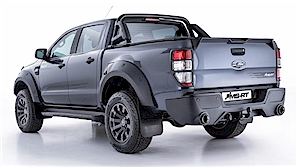 The Ford Ranger is New Zealand’s biggest selling vehicle and has become the bench mark for trade guys. Well here’s one that will stand out at the building site, it’s the new MS-RT Ford Ranger from M-Sport, the team that runs Ford’s World Rally Championship race cars.

An Australian based business, AUTOsource International is the sole Australian agent for the exclusive range of Valentino Rossi VR46 Ford Ranger 4X4 Custom Utes and will bring the MS-RT Ranger to Australian and New Zealand roads.

The designers have taken the Ranger XLT and made a few changes here and there by giving the whole package a radical makeover, we think it looks pretty cool.
The most obvious change to the standard XLT Ranger relates to the bodywork, with Carlex Design providing striking front & rear bumpers, together with widened wheel arches.
The MS-RT Ranger connects to the road on BF Goodrich All Terrain tyres, on unique 18-inch alloys. 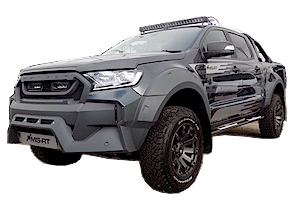 The suspension is a Pedder’s system that adds 2 inches of lift to the ride height, providing an imposing stance and street presence. Dual laser LED light bars are integrated into the front grill, while a single larger unit is fitted to the roof. Inside the cabin there is leather upholstery and a flat-bottomed steering wheel, along with unique contrast stitching.

The rest of the vehicle is standard Ford Ranger, including the infotainment system. You can have the M-Sport stickers or there is a Valentino Rossi edition with bold ‘46’ graphics. The Ranger’s performance remains the same other that the additional dual-exit sports exhaust. That means the 3.2L 5-cylinder turbo-diesel engine up front delivers the same 147kW’s of power & 470Nm of torque.