Home > Customer Service > News Updates > 2018 Articles > Buying a New Ford Online
Ford have introduced online sales for their vehicles in the UK and may be extending this system to Europe if it becomes successful.

Will this impact the local Ford dealer, especially if it takes off? Speculation would say that it would and end up being a service centre and used car showroom and be cut out of the new car market.

Ford has twice previously attempted online sales in the UK, its biggest market, once in 1999 and the second time in 2010. Ford now believes the market has matured and is ready for this now, not like it was in 1999 when Ford say they got ahead of themselves. A car was then considered to be too big a commodity to buy online.

All Ford vehicles will be available on the www.buy.ford.co.uk site and can be purchased using Personal Contract Purchase (PCP) finance, the most popular method of buying a car in the UK for private buyers. Then the new vehicle is delivered to the customers' home and Ford works with an auction company to trade in the used car. You would still be able to organise a test drive at a local dealer to confirm that this is right vehicle for your requirement before the purchase is confirmed. 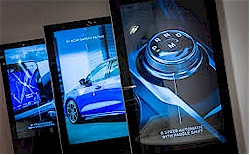 Ford are not giving out sales targets for their online sales system but the idea could be rolled out across Europe if it proves popular with consumers. The UK accounts for about a 30% of the sales volume in Europe, so it makes sense to kick off in the UK, but other markets will be watching with interest to see how things pan out. 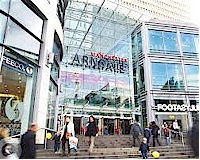 The launch of the online site is linked to the opening of a new Ford showroom in the Arndale shopping centre in Manchester in the northwest of England.

The store has a display of five vehicles and uses the same online buying process as the website via interactive displays.

If this works it could be a sign for what the car makers will use to market and sell their products to customers like you in the future.