Home > Customer Service > News Updates > 2018 Articles > Ford Everest Update
Ford has updated the Everest SUV by adding some new technology, a new engine and a new transmission. With regard to the engine, Ford have lifted it out of the successful Ranger Raptor performance Ute.

This new engine is standard on the Titanium model and is an option on the mid-point Trend. Entry level Ambiente models remain powered by the previous 5-cylinder engine that is linked to the regular 6-speed auto.

Ford is claiming that the new 2.0L engine reduces fuel use on the rear-wheel drive Everest from 8.4L/100km to 6.9L/100km and the towing capacity for the updated models has been raised from 3,000kg to more than 3,100kg. 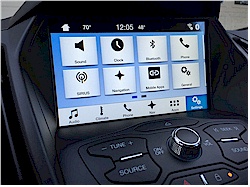 Another bit of new technology on the Everest is Ford’s new Bi-Turbo and running with the 10-speed auto raises the refinement and performance when it comes to outright capability both on and off road with increased power and torque. Also added is autonomous emergency braking with pedestrian detection, (not standard on the base models).

Standard on all models of Everest are keyless entry and ignition, the latest Sync3 infotainment, Apple CarPlay and Android Auto.

Ford has also tweaked the Everest's styling by adding a new grille, while the Trend gets a pair of high-intensity headlights as standard and Titanium models look great on 20-inch alloy wheels.