Home > Customer Service > News Updates > 2018 Articles > Ford Going Electric
Ford have announced that they are increasing their investment into electric vehicles and are planning to have a mix of 40 hybrid & electric vehicles by 2022. Their budget to achieve this goal is US$11 billion, this is up from the previous announced amount of $4.5 billion.

Ford said last October that they would slash $14 billion in costs over the next 5 years and shift their focus away from sedans and internal combustion engines to develop more SUV’s, trucks and electric vehicles, so the change is coming.

Of the 40 electrified vehicles Ford plans for its line-up by 2022, 16 will be fully electric and the rest will be plug-in hybrids.

It seems that carbon emission is one of the main drivers for this change plus the added pressure that Tesla presents with its success in creating electric sedans and SUVs that inspires customers to line up outside showrooms and flood the company with orders, even though Tesla struggles to deliver those orders. 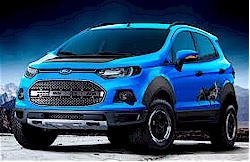 In the believe it or not realm, Tesla Inc. surpassed Ford in market value in 2017, around the same time Ford replaced CEO Mark Fields with Jim Hackett who has announced he will cut costs and drop some car models from the Ford line-up in an attempt to refocus Ford’s direction to SUV’s, trucks and electric vehicles.

The fast growth of SUV’s will figure in Ford’s electric vehicle presentation and some of these electric vehicles will be produced by Ford in China and aimed at the Chinese market.

China, India, France and the UK have all announced plans to phase out vehicles powered by internal combustion engines between 2030 and 2040.

With battery costs supposed to decline and regulators around the world cracking down on carbon emissions, most automakers have been moving rapidly to step up their game with electric vehicles.

Currently the EV market comprises of less than 1% of annual deliveries in the USA however global demand is expected to rise as governments phase out petrol and diesel engines once batteries reach price parity.

Ford and many other carmakers are predicting fuel economy and pollution standards will make the manufacture of automobiles tougher and tougher so Ford are saying that the electrified field is where they want to play, which means they will need to electrify their iconic nameplates, and sell higher transaction-price vehicles.