Ford started talking in 2010 about cutting carbon dioxide emissions from its car-making processes by 30% before 2025. Ford has announced this achievement 8-years early as part of its 2017-18 Sustainability Report, saying it reduced global manufacturing CO2 emissions by more than 3.4 million metric tons from 2010 to 2017. That reduction of CO2 emissions is similar to operating more than 728,000 passenger vehicles for 12-months.

How was it achieved? They hit the target by installing more than 100,000 LED light fixtures and adding solar panels to Ford plants across the globe, including its Dearborn Truck Plant and Michigan Assembly Plant near Detroit.

It also updated its vehicle painting techniques, eliminating drying ovens to reduce energy. Ford has also changed its process in which a machining tool is lubricated with a finely atomized mist instead of using a larger quantity of coolant and water as was the case. 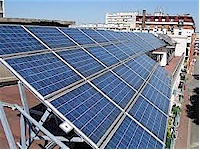 Ford believe that once their manufacturing people accept a challenge they throw everything in behind it and don’t stop until it’s achieved.

Ford is already working on their next goal which will involve additional CO2 reductions as well as adding more renewable energy practices to its vehicle manufacturing processes.

Ford say that they are sticking with the guidelines offered by the PCA (Paris Climate Accord) to reduce vehicle emissions, even though the U.S. has formally backed out of the deal.

Ford are on record saying that they support the call for fuel efficiency for all Ford vehicles they manufacture and take responsibility to reduce where ever possible CO2 emissions in all that they do.