Home > Customer Service > News Updates > 2017 Articles > The new WRC Ford Fiesta
Well it’s a brand-new rally-spec M-Sport Fiesta and it was in second place after the first stage of the 2017 Rallye Monte Carlo and then with Sebastien Ogier at the wheel went on to win the event. Having safely driven the opening stages, Ogier needed to complete the final power stage to seal victory after the day before was cancelled due to spectator overcrowding.

The drive by Ogier secured the first victory for the M-Sport Ford since the 2012 Rally of Great Brittan. New Zealand’s Hayden Paddon didn't progress beyond the first stage after an accident that saw his i20 Coupe roll onto its roof. Both he and his co-driver were unhurt but a spectator was involved and later passed away. Paddon retired from the event as a mark of respect.

The 2017 Ford Fiesta WRC is based on the all-new 2018 Fiesta subcompact with all-wheel-drive and delivers around 385hp and 330 lb-ft of torque. The transmission is a 6-speed sequential gearbox, with an active center differential distributing the torque to the front and rear wheels. The suspension and brakes don’t really share any resemblance with the road-going Fiesta. 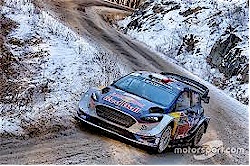 M-Sport’s Team Principal, Malcolm Wilson, believes that they have produced another fantastic car. As the rally season has kicked off with a win at Monte Carlo there is a good deal of anticipation that the Fiesta will do well in 2017. The M-Sport team has a strong driver line-up that may produce some real success. However, Haddon Patton may have other thoughts.