Home > Customer Service > News Updates > 2017 Articles > The Internal Combustion Engine
Well we read that experts are saying that it may take a few more decades before the electric-powered vehicles become the dominant form of personal transport.

The reason behind that comment is that the car companies are continuing to work on petrol and diesel engines that are designed to be more fuel-efficient and produce less pollution. The US department of energy has recently given a Californian based company, Achates Power a $9M grant to develop a small 3-Cylendar, 6-Piston engine. It will be an opposed piston engine and with that type you can achieve the efficiency of a much larger engine but in a smaller and lighter package. 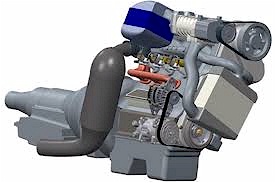 Once their prototype becomes fully tested the car companies would be able to manufacture this engine under license in their own plants and it would be manufactured without any significant retooling costs. The savings are believed to exceed 10% overall per engine compared to the existing engine types.

The Achates Power engine weight is 10% less per equal horsepower and the engine is almost ready to go into production as one has been running on a test bed for 1,000’s of hours already. The projected date for acceptance is estimated to be 2018. Most car companies have already asked for Achates Power to size an engine for an existing model line. The Cummin’s diesel manufacturer is to be the partner for the diesel version. Reports we see are saying that this diesel is 30% more efficient with lower emissions than conventional diesel engines. 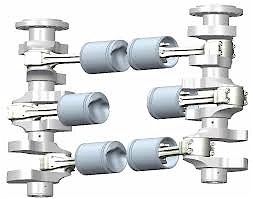 For a brief explanation of how the opposed piston engine works, it’s basically a 2-Stroke engine with a separate oil flow. No cylinder heads or valves, which are both sources of a loss of heat and power for conventional combustion engines. The 2 opposing pistons move against each other in the one cylinder compressing the fuel and the air mixture at the center and once it self ignites the pistons are pushed apart generating the efficient power stroke.

Then the exhaust gas escapes through ports in the cylinder walls and because the engine has less of the conventional engine parts this type of power plant is much more inexpensive and simple to manufacture. Larger opposed piston engines like this type have been in action mostly in the military and other specialist applications.

Are there any problems with this technology? It does have some issues to overcome and they are mostly to do with the running temperature. This engine needs to reach a certain level of temperature inside the combustion chamber to allow the fuel to ignite. Achates Power along with Argonne National Laboratory and Delphi Automotive say that they will overcome these obstacles and by 2018 will have a 50% more efficient 3.0L 3-Cylinder engine that will be suitable for passenger and commercial vehicles.