Any Holden die hard looking for a decent sized 7-seat SUV, may be swayed with the US-designed Acadia heading this way in 2018. Not all US-developed vehicles have been huge successes in Australia and New Zealand, especially when you look back at some examples like the Taurus and Probe, although they came from Ford.

However, the Acadia will be built on GM’s new C1XX structural platform, which is the SUV version of the E2XX that supports the European designed 2018 Holden Commodore. This is similar to what Ford did with the build relationship between the Falcon and Territory. This will now give Holden a 4-pronged SUV line-up which also includes the Trailblazer, Equinox and Trax. 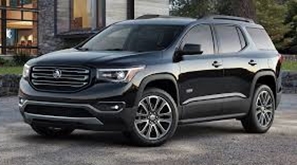 Holden has been working hard to get the Acadia into this part of the world by spending millions to produce a right-hand drive version. It will have a right-hand indicator stalk, a right-hand-focused centre console and gear selector.

It should look very similar to the GMC tough truck already selling in the US and follows the current SUV trend of being lower, more car-like, similar to the Mazda CX-9 and Audi Q7 with a lower body delivering better stability and improved aerodynamics for fuel efficiency.

Nobody is saying what the pricing is yet for the Acadia, including what the full features list will look like, but it should include a multimedia system with Apple CarPlay and Android Auto, wireless phone charging, proximity unlocking and an automatic tailgate. Other features could include heated and ventilated front seats, a two-panel panoramic sunroof, tri-zone climate control and 5 USB ports scattered throughout the vehicle.