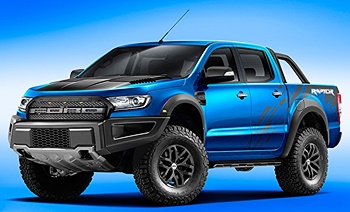 Ford has announced that the very popular and their best-selling vehicle the Ranger utility will be available in an off-road performance version possibly called a Raptor.

Supposed to be arriving here next year, the Ranger Raptor sports will be different than all the other Ute’s on the road in New Zealand.

It derives its pedigree from America’s best-selling Ford F-150 Raptor truck and the word is that the Ranger Raptor will create a class of its own among off-road performance vehicles.

Ford Australia has considered the idea of a Ranger Raptor in the past to take advantage of the best-selling American Ford F-150 pick-up truck. Ford applied to trademark the names ‘Ford Ranger Raptor’ and ‘Ranger Raptor’ in Australia in 2016 and rumours of the hard-core dual cab have been in the news for a while now.

The engine details for a potential new model remain uncertain. However, we may see the 2.7L V6 EcoBoost turbo petrol engine paired with a 10-speed auto transmission that was developed in conjunction with General Motors to power this vehicle.

But - and there is a but, we are reading of a possible naming issue that Ford will have to deal with. Hino Motors, the truck division of Toyota, currently owns the Raptor name after securing the rights to it nearly 30-years ago. Though it appears Hino has never used that name, they continue to regularly keep it updated.

Ford will have to negotiate with Hino to be able to use the Raptor name in Australia and New Zealand. Ford Australia and Hino Motors have agreed to a cooling-off period while talks continue between the companies, aimed at coming to some sort of an amicable settlement.