The Ford Motor Company has cancelled plans to build a new manufacturing plant in Mexico and instead is investing $700 million in Michigan and investing large on artificial intelligence.

This is on the back of Donald Trump promising to create a pro-business environment for American businesses. Trump had criticized Ford for their plan to pump investment capital into Mexico by moving the small-car production to that region.

The $700 million will be invested in its plant in Flat Rock, Michigan and create around 700 jobs producing electric and self-driving vehicles. 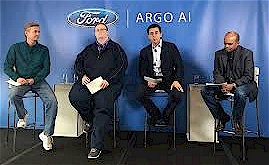 Ford has announced as well it would invest $1 billion in the Pittsburgh-based Argo AI, a recent venture focusing on artificial intelligence. The plan is to develop a software platform for a fully autonomous vehicle for ride hailing by 2021. Bryan Salesky and Peter Rander, who left Google & Uber respectively, founded Argo AI in 2016.

They are all talking up the future and looking to define the next 10 years as the decade of automation of the automobile. These innovations will have similar impact on society as Ford’s moving assembly line did 100 years ago according to this group of automotive guys.
C3. Ford autonomous vehicles graphic

The autonomous vehicle technology developed through this new partnership could be licensed to other automakers and the machine-learning software that acts as the brain of autonomous vehicles would be combined with the robotics talent and expertise of Argo AI to deliver the virtual driver system for Ford's self-driving vehicles.

Ford would develop the systems integration, manufacturing, exterior, interior design, and regulatory policy management and they announced that the successful rollout of self-driving cars would fundamentally change how people and goods move in the future.