Home > Customer Service > News Updates > 2017 Articles > Ford Focus ST
Stories are starting to appear about an upgrade to one of Ford’s biggest selling vehicles the Focus. This will be the next generation programmed to appear sometime in early 2019.

The news mainly centers on the performance ST model and it’s about to get a smaller and more powerful engine. The current ST is a turbocharged 2.0L 4 Cylinder producing about 188kW and continues to provide an enjoyable driving experience. 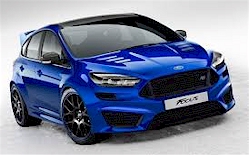 The turbo technology that forces the induction would be upgraded so that a twin-scroll turbocharger would be working and this would lead to an increase in power over the current Focus ST. A power jump from 188kW to 205kW by using a smaller engine that is lighter and more fuel-efficient seems like a step in the right direction to us.

This should tide the Focus performance fans over until a new Focus RS arrives on the scene. That's a healthy change for an already fun car. Other changes could potentially include a lift in the look and feel, both inside and out.