Home > Customer Service > News Updates > 2017 Articles > The Ford Ecoboost Engine
Less than a litre, rather small actually, but Ford engineering has made a believer out of many people with their 1.0L EcoBoost engine winning the under 1.0L engine section again for the sixth year in a row.

Ford have been continuously inventing and reinventing this engine and from 2018 the EcoBoost engine will come with cylinder deactivation to make it even more economical. This is a 3-cylinder turbocharged petrol engine that is found currently in both the Fiesta and the Focus. 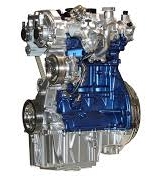 Talking about the new Focus, it weighs in at 1,319 kilos, add in a couple of big blokes and some golf clubs and you might have about 1,550 kilos for this little engine to lug around. Combined with a 6-speed manual transmission that has two overdrive gear ratios, the 1.0L EcoBoost moves the Focus out in style, while maintaining excellent fuel economy and will get you to your tee off spot on time. 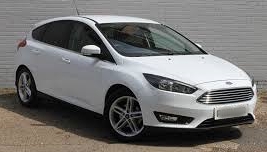 So, how can an engine so small, small enough that the engine block could fit inside a small suitcase, produce enough power to make you smile?

The answer begins with the small displacement turbocharger that provides the power boost almost instantaneously because of the low inertia of the rotating components.

Peak torque starts at just 1,400 rpm and maintains it right up to 5,000 rpm. The engine only puts out 148 foot pounds of torque but delivers this over a wide engine rpm giving throttle response which makes the vehicle a pleasure to drive.

The EcoBoost manual transmission option will pull smoothly in a higher gear from just about idle, so you don’t have to shift gears so often. The low inertia turbocharger will spin up to 248,000 rpm and the ECU will produce an over boost condition for up to 15 seconds for quicker acceleration.

Direct fuel injection and variable camshaft timing help the power output of the EcoBoost and both intake and exhaust camshaft timing are varied by the ECU so that the 4-valve cylinder heads will operate efficiently at all times. Getting maximum air in and exhaust out are what makes for a high performance and efficient engine.

One of the hurdles you face with 3-cylinder engine configuration is vibration. For example, an inline, 6-cylinder engine is easy to balance, because the pairs of pistons are at the top of their stroke at the same time, the firing pulses are equally spaced and the crankshaft can be counterweighted to offset the weight of the piston and connecting rods.

To counteract the vibration inherent in a 3-cylinder design, rotating balance shafts can be built into the engine design, but this adds weight, complexity and friction. Ford have worked on controlling the 3-cylinder vibration without balance shafts and have used a counter-weighted crankshaft pulley and rear flywheel to convert the vibrations into lateral movement and then uses specifically-designed motor mounts that can absorb that lateral vibration producing a smooth result.

The engine will vibrate but you will never notice it, so the result is a very smooth feel. The 1.0L EcoBoost engine is already a proven winning design. It has been offered for sale in Europe since 2012, was introduced into America in the 2014 Fiesta and in the 2015 Focus and with continued Ford reinvention more to come in 2018.