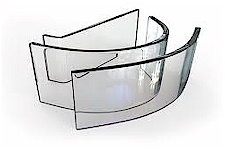 1. GORILLA GLASS
You may not know but Gorilla Glass is used in smart phones, computer & TV screens and it looks like it’s making its way to the car. This type of toughened glass is now in its fifth generation designed to be thin, light and tough. The glass gains its surface toughness, ability to contain flaws, and crack-resistance by being immersed in a patented, hot potassium salt ion-exchange bath. (To technical for most of us).

At a recent Consumers Electronic Show in the US there were Gorilla Glass panels with digital displays built directly into them being demonstrated. The integrated display is transparent enough to see through when nothing is shown, and can overlay information inside the glass. It’s also able to dynamically darken for tinted windows when required.

Ford have started installing Gorilla Glass windscreens in the Ford GT as the glass is one third lighter, two times stronger and three times better for optical display. This glass can also be formed into shapes with tight curves for touchscreens, instrument clusters and mirrors. 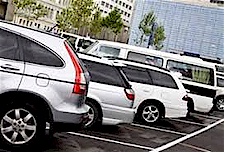 2. ACTIVE CAR PARK MANAGEMENT
Finding a car park can be hard work so the automotive industry is working on navigation systems to guide you directly to the closest vacant car park space. The idea behind this new technology is for cars equipped with parking sensor capabilities to constantly scan the side of the road in city streets using their parking sensors. As these sensors detect an area large enough to park a car, the location information is uploaded to the cloud, where your navigation system can retrieve it.

You would enter your destination information into your GPS system and the guidance would take you straight to the car park that is closest to your destination cutting out all that frustration when locating a place to park. 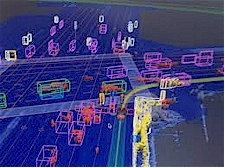 3. CLOUD BASED MAPS
As the artificial intelligence in cars continues to collect more information about the environment in order to self-drive this should have a real benefit for all vehicles. Real-time cloud based maps, updated over the air by sensor data from cars is a new innovation beginning to take shape and will give more detailed and accurate information about the roads we drive on than ever before.

High resolution, three-dimensional scanning that can determine what objects are, even down to differentiating between a bicycle and a motorbike is in development. The thinking behind this is for satellite navigation systems to refer to an on board map and real-time information from the cloud, so that autonomous functions will work when network connectivity is not possible. High-definition information about traffic, road works and other new developments will be relayed with pinpoint accuracy.

4. ARTIFICIAL INTELLIGENCE
So what is artificial intelligence in a car?
Well, the car will be able to help with tasks whenever you ask, or a little more worrying automatically predict things based upon your behavior it has learnt over time. This is known as deep learning and is the concept behind systems like Siri, which can interpret requests based on contextual understanding.

For the car application, it can get to know what you do on a regular basis, and suggest actions it thinks you might be after. (Could get a little annoying). Example, before you ask where the nearest petrol station is, the car will know that you’re getting low on fuel, and will find the petrol station with the cheapest fuel and the nearest route based on your regular movements or destination.

5. HOLOACTIVE TOUCH
This one’s a bit more science fiction and although it already exists may take some time to arrive in the cars we all buy. The system has been named HoloActive Touch and it’s a full-colour holographic image that’s reflected off an LCD display buried inside the center console.

The hologram then floats in mid-air in front and in reach of the driver. The hologram displays all the car controls and can be operated by pressing your finger or by intuitive gestures. They want move the dashboard and center console further away from the passengers, and open up the interior to feel more like a living room rather than a car.