Home > Customer Service > News Updates > 2017 Articles > More News about EV's & AV's
According to the news agency Reuters, General Motors and a Californian company called Lyft are working together to develop thousands of self-driving electric vehicles in a test program that will start at the beginning of 2018. 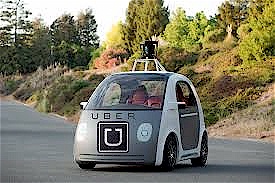 The vehicle will be a specially equipped Chevrolet Bolt and be involved in Lyft’s ride-sharing fleet program and then tested in several states across the America.

GM is not planning to sell Autonomous Vehicles (AV) to their retail customers at this stage but rather mass produce these Bolt’s and test them in ride service fleets as the first phase.

The news about GM using their electric vehicles in driverless fleets comes just a few of months after Fiat Chrysler broke the news that it would provide 100 Chrysler Pacifica minivans to a Google-owned company called Waymo.

Waymo is converting them for self-driving tests and they are being outfitted with Google self-driving technology, including a purpose-built computer and a suite of sensors, telematics and other IT systems.

It appears that the self-drive autonomous vehicle market will be best tested on a ride-sharing platform. You will need to spend up to 6 figures at the beginning on a Bolt AV or something similar but some are saying even at that level you will be able to build a commercial business that will work.

That maybe true in a market the size of the states but what about New Zealand?
March 2017