Home > Customer Service > News Updates > 2016 Articles > What goes in your Tyres
John Dunlop designed the pneumatic tyre back in 1888 and is basically a round-shaped bunch of cords and steel wires encased in black rubber and filled with compressed air. While solid rubber tyres are more durable, their ride quality is poor. With nearly 130 years of tyre refinement, the pneumatic tyre is here to stay for some time yet. Tyres are manufactured in approximately 455 different factories around the world, which produce about 1 billion tyre products each year. The big 5 tyre manufacturers are Bridgestone, Michelin, Goodyear, Continental, and Pirelli.

The basic ingredients for a tyre are, rubber, carbon black, and a cocktail of chemicals. Tyres are constructed in a drum and cured in a press under heat and pressure. The resulting elastic rubber infused components let the tyre compress when it touches the road and then reform to its original shape. With some variation, these components make up a pneumatic tyre: inner liner, body ply, sidewall, beads, apex, belt package, tread, and cushion gum.

The pneumatic tyre works by the tension of the cords pulling on the tyre bead evenly around the wheel rim but not along the road contact section and the bead transfers any pressure to the rim. Air pressure through the ply cords is applied to the bead around the wheel rim and dispersed in all directions, but if the tread is pushed in on one side, the opposite side will compensate.

Michelin developed radial cords in the 1940’s as an improvement to the cross-ply tyre design as the radial tyre ran cooler with decreased roll and added life.

At the extreme end of tyre technology currently, one example would be Pirelli, testing what they call “digital tyres”. Fitted to a Ferrari FXX K supercar it collects data relating to the coefficient of friction, footprint, and road type, which is then communicated to the Ferrari’s computer and traction control systems to optimize the power delivery from the engine based on this grip information.

This maybe a little extreme but there have been a number of hi-tech automotive advancements that have found their way into mainstream motoring.

Some more down to earth technology being developed by Michelin relates to giving a consistent performance from start to finish. This French manufacturer has invented a tyre that will maintain its performance as it wears out, retaining its road-holding until the very end. Current tyres on the market are great when fitted new, but as they get worn down they lose their grip and therefore become less safe.
Michelin call this “EverGrip,” its main tread grooves get wider as they are worn down, leaving plenty of space for water to escape. Michelin makes its EverGrip tyres with tiny slices that expand into teardrop shapes and compensate for having shallower grooves, so the tyres become safer as they wear-out.

Self-inflating tyres are another technology being worked on for the consumer market. Already used in other areas like heavy machinery and military, self-inflating tyres rely on sensors to measure the air pressure in the tyre. If the air pressure is too low or too high, an air source inflates or deflates the tyre. Something a little more practical being considered is a coloured coded when worn-out tyre. One that starts black and once wears-out turns a bright colour to warn the driver it’s time to change. 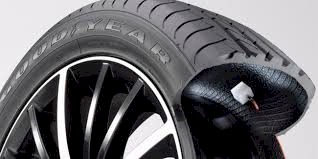 Hankook a South Korean tyre company has been experimenting with a tyre design that doesn’t need air. They call this “iFlex and want punctures and leaks to be a thing of the past. It’s manufactured entirely of eco-friendly materials and has been put through ride and handling tests.

Since 2011, Hankook has been working on airless geometric shapes to offer the malleable, bouncy qualities of a standard pneumatic tyre. Hankook’s latest version has been designed to fit on any wheel rim. When tested for durability, hardness, stability, slalom, and speed, Hankook NPT (non-pneumatic tyres) performed comparably to traditional air-filled tyres.

Not only does the new design reduce the construction process, its build materials can be recycled easier than the current rubber, steel, and chemical compounds. 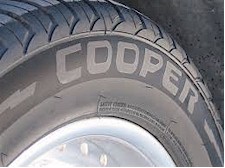 The Cooper Tyre & Rubber Company is looking at developing a tyre without rubber. It’s a new synthetic rubber made from the guayule plant, common in southwestern deserts. This could become an essential component of future rubber compounds.

By 2017, Cooper is planning to show a production-ready example that will reduce dependence on petroleum; something the U.S. government and other governments will be pleased to hear.

Who’s heard of guayule? Its been used in natural rubber production since the early 1900s. Until now, it’s been held back from broader commercial use because rubber (the present standard) resists cracking and heat buildup better than guayule.

If Cooper Tyres can overcome these obstacles, the entire industry could transition for the better of the environment.