Home > Customer Service > News Updates > 2016 Articles > The Equinox is coming
The Holden Captiva we have been used to for some years now has always been a Korean Daewoo wearing a Holden badge. So now General Motors are saying that they are about to replace the Captiva with something called an Equinox and it will be a global SUV. It’s not as tall as the Captiva, weighs about 180kG’s lighter and has 5 seats; it should be in Australian and New Zealand showrooms in 2017. 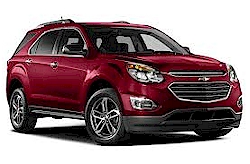 The Chevrolet Equinox looks like an American designed and built SUV and is reported to be offered for sale soon in over one hundred markets across the globe once it's released next year.

For those who are more technical, it will be built on the new GM D2XX platform with multi-link rear and MacPherson strut front suspension, with an ability to have electric or hybrid drivetrains.

The transmission details from what we can see could be a 6-speed auto for the 1.5L and 1.6L and a 9-speed auto for the 2.0L. There looks like options for both AWD and FWD, 360-degree cameras, auto emergency braking, lane keep assist, lane departure warning and rear cross-traffic alert to cover the safety features that are more common today. An all-wheel-drive system that disconnects the rear axle when it's not needed has also been flagged.