Home > Customer Service > News Updates > 2016 Articles > Holden Acadia
Have a look at what Holden hopes will be a big selling SUV, the Acadia.

SUV’s in New Zealand and Australia continue to sell at record levels, so Holden will launch a large SUV on the family market with the GMC Acadia. It’s a big seven-seater made in the US and it’s coming here.

This is just one of the 20 plus new imported models due to fill the Holden showrooms by 2020. The Holden badge will replace the GMC logo on the grille but most likely share the Acadia name. Holden dealers were told it will sit above the Captiva in the line-up. 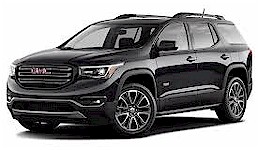 The Acadia will have the latest technology; GM is now manufacturing vehicles for the global market and the Acadia is no exception. It’s due to be available with a 4-cylinder and V6 petrol engine and also a diesel option.

The Holden Acadia will compete with Toyota and Nissan the other producers of seven-seater SUVs with Ford still to let us know what is to replace the Territory after October 2016. However, unlike the Toyota and Nissan, which are petrol only options, the diesel powered Acadia will appeal to the top end of the SUV market.

What we have seen so far from Holden for it’s future line-up: The vehicles we wont see include the Chevrolet Silverado pick-up, as GM is unlikely to convert the Silverado to right-hand-drive. The Opel van as there is a GM version of the Renault Trafic van in Europe which is sold as an Opel in Europe and a Vauxhall in the UK however Holden has ruled it out for now because it wants to focus on the Ute market and not the van market.