Home > Customer Service > News Updates > 2016 Articles > The big selling Ford Ranger
The Ford Ranger remains at the top of the commercial sales in New Zealand and is out selling all other Utes in its class. The 147kW/470Nm 5-cylinder diesel engine is as solid as a rock and all models come with either a 6-speed manual or automatic transmission.

This vehicle is great to drive, has some great looks and is well built, it is easy to see why the Ranger won over the Kiwi Ute buyers over the last few years especially the facelift PX2 that came out late last year. As of writing the Ford Ranger is the best selling vehicle in New Zealand for 2016 with the Toyota Corolla, Hilux and Holden Colorado in second, third and fourth place respectively. 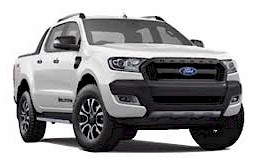 What stands out with the Ranger?
The Ranger is a rugged vehicle with light steering and good safety features. Top of the range models have nicer trim, comfort and work for the family situation. Rangers are great off-road, partly because all 4WD versions have locking rear differentials.

What might be a pain with the Ranger?
Getting around city streets and parking in tight spaces, the Ranger is a larger vehicle and only the more expensive Wildtrak comes standard with a reversing camera. Expect a bouncy ride with no load, as all Utes have stiff springs at the rear so that they can manage a heavy load.

Where is the Ranger built?
The Ranger is built in Thailand and shares its engine, suspension and platform with the Mazda BT-50, both are made in the same factory.

What makes the Ranger so good?
November 2016