We have all witnessed the technology sector making countless improvements over the past 30 years but batteries have fundamentally remained unchanged. Almost everything with an electrical circuit is powered with a battery, from smart phones and watches to the vehicles we drive.

The conversation has been going on for ages that the next step for the automotive sector will be electric cars but the handbrake to that advancement has always been the battery. Hybrids have a conventional engine under the bonnet to help out the electric motor so you can’t call that a huge step.

Lets compare the battery power output to conventional fuels: So you can see that battery technology has a long way to go before it can catch up with conventional fuels. There are batteries that use other elements such as sulphur or silicon, but the struggle is in increasing the energy density as well as meeting strict safety requirements.

Some sort of breakthrough in energy density storage is needed, and companies, including some of the oil giants, are working on it. There’s a lucrative market for anyone that succeeds but the limitations imposed by the chemistry of batteries are proving very difficult to overcome. 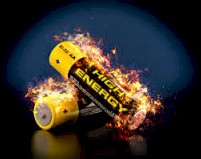 We have read some interesting comments about increasing the energy density needed to store in a battery as the more energy you put in the more dangerous or unstable it becomes.

Safety around thermal management is crucial, if a battery heats up beyond 80C, the components become unstable and then explode. That’s not the kind of experience manufacturers are after for their consumers.

The battery market is forecast to be worth around US$120 billion by 2019 and some interesting groups have formed investing heavily into battery research.

Tesla’s electric cars claim a range close to 480 K’s per charge and the company has recently entered the domestic battery market. The group is investing about $5 billion in a Giga-Factory so making batteries on a large scale will be crucial for pushing electric cars into the mass market.

Currently the battery makes up about 20% of the price of a Tesla Model S, which starts from about US$76,000. Think about that for a moment, replacing the battery in a Tesla could cost you over US$15,000

To match the range of conventional fuels on a single tank you must be looking close to 800 kilometers before a recharge. IBM’s Battery 500 Project using Lithium-Air have the potential to reach similar energy densities as petrol, which is also true of the Metal-Air batteries but we read that this could be 20 years plus away from being a commercial reality.

Research has also been focused on the energy supply to batteries but the problem with renewable energy sources such as the sun and wind is that they’re intermittent. Commercial battery firms are trying to get the most out of Lithium-ion or similar cells and look for improvements. A big advance in battery technology should be coming but not just yet.