Home > Customer Service > News Updates > 2016 Articles > Autonomous Vehicles
So what is Ford talking about? Well they are confident they will have a fully autonomous vehicle in commercial operation by 2021. A device with no steering wheel, no accelerator, no brake pedals and driver not required. 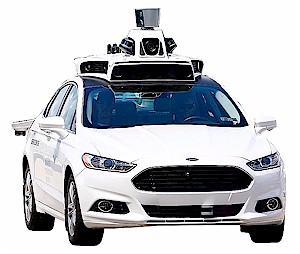 Is this the shape of something quite different even revolutionary and something you wouldn’t have thought possible just 5 or so years ago? Most of us have been thinking of driver assist technology making it easier and safer but this is a different direction.

Ford believes that the world is changing quickly and they don’t want to watch but be proactive and drive the change. The plan is to impact the autonomous vehicle market in the same way their assembly line revolutionized the auto industry over a hundred years ago.

It was then that Henry Ford’s mission was to “make people’s lives better”. So what about “better today” because the autonomous vehicle can address a host of safety, social, and environmental challenges.

Focusing first on safety, the automotive industry in the US has to face over 30,000 vehicle related human error deaths every year. Ford says that the autonomous vehicle has real potential to diminish fatalities. In addition it could also open up opportunities for the elderly, people with disabilities and people not yet old enough  to drive  or don’t own a car.

Whether this relates to the New Zealand situation is yet to be discovered but the nature of vehicle ownership is changing everywhere. Growing amounts of people are beginning to rely on shared forms of transportation, which could translate to better efficiently, decreasing vehicle pollution, quick and easy parking, reduced traffic congestion and generally making life better all-round.

Ford is being careful to say that there’s no one-size-fits-all solution. For most of us the autonomous vehicle is a new idea, so we also understand that trust in what we don’t yet fully understand really matters. Ford believes that they have spent the last 100 years earning your trust.

As they move toward 2021 they will be expanding their presence in Silicon Valley by building new plant, increasing staff, attracting top engineers, technologists, designers & researchers and investing in other companies like Velodyne, the Silicon Valley-based leader in LiDAR (Light Detection and Ranging). This technology assists autonomous vehicles navigate in real time.

Another acquisition for Ford will be SAIPS, a machine learning and artificial intelligence start-up based in Israel, which will play a key role in image and video processing, object detection, signal processing and deep learning capabilities to help autonomous vehicles learn and adapt to their surroundings.

Others include an exclusive licensing agreement with Nirenberg Neuroscience that enables autonomous vehicles see the world around them linked with Civil Maps for high-resolution 3D maps. Plus they are working with a number of universities, including Stanford, MIT, Michigan and Aachen in Germany.

Vehicles manufactured today are made with up to 6,000 parts and more than 130 million lines of code supporting everything from engines to driver assist technology to entertainment systems. More and more vehicles are being connected to the cloud so vehicle companies are becoming the ultimate system integrators.