Most will now know that the Ford Ranger Ute has become the biggest selling vehicle in New Zealand outselling all other vehicle types including the Toyota Corolla. It has even ended the Toyota Hilux' 32-year reign at the top of commercial vehicles sales. 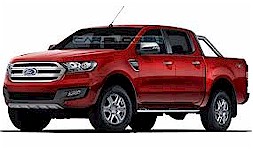 The Ranger was also the top-selling commercial in December last year with more than 700 units sold in that month, which took the final sales figure for all of 2014 to 6,345 units. With that result the Ranger finally knocked its rival of the top spot. With all due respect to the Hilux it had been the light commercial champion for 32 years, which was started by the famous 1980’s television ads featuring Barry Crump and his crazy exploits.

2014 has been a huge year for vehicle sales in New Zealand up by 21% from last year with total registrations just over 265,000. Brand new commercial registrations were up 19% and new passenger vehicles grew by 10%. However even more Japanese imports poured into the country again up over 30% on last year with nearly 130,000 arriving at the ports.

Some are saying that New Zealand was doing a bit of catch-up from the global financial crisis while the dollar remained very strong until recently when the dairy price dropped to an all time low. A high dollar helped when importing vehicles as well as some general confidence in the economy.

The top-selling new passenger car of last year was of course the Toyota Corolla and it was twice as popular as the Holden Commodore, with the Suzuki Swift in third place. Looking at what was imported the three most popular were the Nissan Tiida, the Suzuki Swift and the Mazda Axela.

Next year’s Ranger will be refreshed with styling and technical upgrades aimed at making the XLT and Wildtrak double cabs more attractive for families. Ford will be first to bring safety features like lane departure warning, collision warning and radar cruise control to the light truck segment, and this becomes more important as these vehicles get more popular with family buyers and recreational off-road enthusiasts.