Various models of Europe’s Opel Monza and the British Vauxhall Royale were developed in the seventies and early eighties and sold in Europe and Great Britain.

There was an American Chevrolet Monza as well but we missed the Monza name here in New Zealand as at that time General Motors Australia was transitioning from the Holden Kingswood to the Commodore and the Monza badge never really showed up in this part of the world.

The Monza name has a bit of history to it and according to what we have seen in motoring reports it’s about to make a return. Opel has trademarked the Monza name internationally, including this part of the world and speculation is building that there will be a coupe variant for the new Holden Commodore in 2018.

Why a Commodore coupe?
The Monaro name would seem a more obvious choice for a Commodore coupe but as we wait more information on Holden’s promised rear-wheel V8 sports car a Holden Monza coupe will certainly be interesting and different. 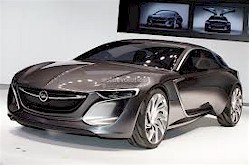 It’s known the sedan will be imported as the next-generation Holden Commodore after local production ceases in late 2017, which means the Monza name will most likely be applied to the coupe variant although not yet confirmed.

The 2018 Opel Insignia, based around the front-wheel and all-wheel drive architecture, will already have plenty of styling influence from the 2013 Opel Monza concept car shown in Germany recently. So a coupe would sit quite well with the wagon and sedan for Holden’s Commodore line up.