Home > Customer Service > News Updates > 2015 Articles > Holden History
A little bit of Holden history was uncovered a few years ago in a residential garage in an inner city suburb of Melbourne. A bloke discovered a very rare 1946 Holden prototype among his late father's collection of automotive stuff. 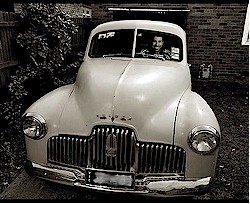 It was a Holden 48-215 or known then as a FX Holden in semi-reasonable condition despite some issues and a bit of surface rust.

It was reported as being purchased by his late father from the estate of a former Holden factory worker and it looked like it was the missing link in the evolution of the modern Australian automobile as the number 2 was spotted stamped on a plate under the vehicles bonnet.

A number of clues, apart for the number 2 stamp, to the Holden’s significance were spotted at the time, the location of the rear vision mirror near the roofline, later in the production of the FX Holden it is positioned halfway down the split windscreen.

The registration papers show the brand name Chevrolet deleted and replaced with Holden and there are those squared-off front guards, which lack the graceful curve that became so iconic. According to the bloke the records that came with the Holden show it arrived in Sydney during December 1946.

The vehicle was up for sale at that time for over a million dollars although the doors and bonnet were an ill fit, the roof was pockmarked and rippled, the paint was patchy and dull but the historic appeal was extremely significant.

The other two prototypes are still in existence although the number 1 prototype was rebuilt after it was fire damaged and is on show in the National Museum of Australia in Canberra and continues to be one of the most popular exhibits. What’s lurking in your garage that could be of historic significance could be worth a look?