Home > Customer Service > News Updates > 2015 Articles > The next Holden Colorado
It’s back to the past for General Motors and Isuzu as they plan to merge their expertise back together to co-develop the next-generation Holden Colorado and Isuzu D-Max Ute. This is for the vehicles that will go on sale in the markets outside of North America, which includes of course Australia and New Zealand. The next Holden Colorado and Isuzu D-Max will be built in Thailand and the join venture has been set up to save manufacturing, engineering and part costs according to recent reports.

GM Holden has confirmed that the new joint venture version of the Colorado Ute will replace the current Thai-built Holden Colorado light commercial that has been sold with a Holden badge since the middle of 2012. Holden have not yet talked about a definite launch date for the third-generation Colorado but it could be a few years away. 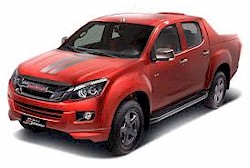 The Isuzu version will wear the D-Max badge in this part of the world where the Isuzu Ute has been selling quite well in the light commercial market. The Australian based GM Holden design team is expected to submit ideas for the new joint venture light commercial range, as it does with most GM products. The design and engineering base for the current Holden Colorado has been in Brazil with the manufacturing in Thailand.

There are currently a number of joint ventures in place for the expanding light commercial truck sector with Ford and Mazda and most recently Nissan and Mitsubishi working together so this new agreement fits into the current trend but is a bit of a U-turn after GM and Isuzu moved apart back in 2006.

This new model to be developed by GM Holden and Isuzu will not be sold in North America where the current-generation Colorado has gone on sale badged as a Chevrolet. Although the current Colorado and D-Max are similar, they are built in different factories and feature different styling and engines. The D-Max is powered by a 3.0L Isuzu diesel, while the Colorado is powered by a 2.8L diesel.

So soon we will see a third generation Holden Colorado developed by both GM Holden and Isuzu with a possible Australian design influence for the fast growing light commercial truck market. Holden as well as Isuzu, we are sure will be hoping to have a vehicle that can compete with the record breaking Ford Ranger that is out selling just about everything it comes up against.