Most people know the Ford Motor Company story and how it started with Henry Ford the son of a farmer establishing the business back in 1903. Henry Ford has been the subject of many TV documentaries over the years with his methods and systems that changed the industry so markedly for that time.

However what is less known is the extent of Ford’s involvement in the auto industry around the globe today. 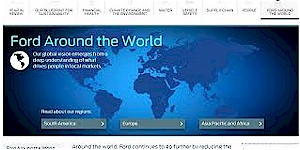 Ford is now a huge multinational carmaker with its head offices in Dearborn, Detroit and sells cars, commercials and trucks under the Ford and Lincoln names.

Ford has its fingers in number of ventures around the world including the Brazilian SUV manufacturer, Troller and Australian performance car manufacturer FPV.

Ford is also involved in a number of joint ventures, two in China with Changan Ford/Mazda and Ford Lio Ho. One in Thailand with AutoAlliance, one in Turkey with Ford Otosan and one in Russia with Ford Sollers.

Ford is also listed on the New York Stock Exchange and is controlled by the Ford family, although the family has minority ownership. It is described by Forbes as "the most important industrial company in the history of the United States."

Ford’s most famous innovation was the introduction of the moving assembly line, higher auto worker pay rates and introduced methods for large-scale manufacturing and management of the industrial workforce that was ahead of its time and by 1914 these methods were known around the world as Fordism.

Ford had a number of past ventures that it has either sold on or moved away from like Jaguar in 1989 and Land Rover in 2000 both were sold to the huge Indian automaker Tada in early 2008.

Ford used to own the Swedish automaker Volvo from 1999 to 2010. The Mercury name and brand was established in 1938 and was dropped in 2011, the Mercury branded vehicles were marketed and sold the United States, Canada, Mexico and the Middle East.