Home > Customer Service > News Updates > 2015 Articles > Chinese Vehicle Sales
The new-vehicle market in China is now the biggest in the world. However in recent times, slowing economic growth, new limits on vehicle ownership in certain areas of China, and volatility in the stock markets have kept consumers away from the showrooms.

Automakers selling vehicles in China have felt the impact of the economic slowdown to some degree but so far General Motors is faring better than VW and also better than some of its other competitors. GM has reported record sales in China during the first half of 2015, with total vehicle sales up over 4% even after a good result in 2014.

GM and VW are the two biggest participants in China's auto market with GM selling more vehicles in China than anywhere else, including America. What is proving to be a winner for GM is its sales of SUV’s and this has slowed down any real decline. It might be surprising to learn that GM was somewhat late to respond to the demand for SUV’s in China. Chinese buyers started turning toward SUV’s a few years ago and GM had very little to offer back then. 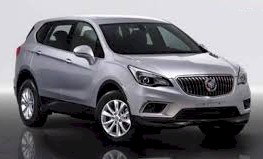 All that has changed recently, with sales of SUV’s increasing to just over 80%, for the first half 2015. Leading the sales charge is the Buick Envision a model that’s not sold in the America yet. The Envision is a midsize crossover SUV that slots between the other two Buick SUVs that are familiar to Americans. Both of those are also sold in China, and demand for the three Buick crossovers as a group more than doubled in the first half of 2015, with almost 100,000 vehicles sold.

Will the Chinese keep buying SUV’s? Not at the same rate if the down turn continues.

Ford has also posted enormous growth in China over the last few years, but growth for Ford, another big player in the Chinese market, has only registered 0.1% growth so far in this year. Toyota, Honda, and Nissan all did a little better, but they were coming of some very low sales compared to GM, VW and Ford.

All the car companies are experiencing minimal growth in China and everywhere else and predictions are for that to continue for some time. GM, Ford, and Volkswagen have all cut their prices on key models earlier this year to counter sluggish sales and to fend off increasingly strong competition from China's domestic car companies, particularly in the smaller SUV market. Total sales of all vehicles in China for 2013 were 21.99 million and last year (2014) came in at 23.5 million. So far this year sales are just over 10 million with just over 5 months to go.