The Australian made and Holden’s best selling car the Cruze, continues to come under sales pressure from similar size and performing rivals like Corolla, Pulsar, i30, Focus, Lancer, Civic, Impreza, Cerato, Mazda3, Golf and a host of similar Korean and European models.

We need to be reminded that the Cruze is a global car and it was in the top ten best selling cars of the world in 2013. GM lives in the real world and has to make cars that they can sell to their customers so whether it’s made in Australia or some other part of the world it’s a car that’s here to stay. 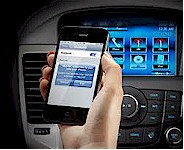 As mentioned the Holden Cruze has many competitors and the Corolla and i30 both have new models this year. To help increase sales the latest Cruze has added a number of new hi-tech features: Like the VF Holden Commodore system, the Cruze has a voice activation function that has been adapted to recognise a down-under accent, enabling Apple iPhone owners to perform a number of functions hands and eyes-free.

Cruze drivers can now select a music track, switch between embedded apps, listen and with a compatible iPhone reply to text messages, dial a contact or instruct Siri via the iPhone to perform a range of tasks like having your text messages read out while driving.

First introduced in the Barina CDX earlier this year, Siri Eyes-Free is now offered as standard across most Australian manufactured Holden vehicles and will be introduced on more Holden vehicles in coming months. Holden MyLink is now available on a bunch of new Holden’s like the VF Commodore, MY14 Cruze, Malibu and Barina CDX.

Well it’s a car that deserves some attention as most reports we are seeing about this Australian made small to mid-sized vehicle saying it’s worth a second look. Since it's has moved from being built in Korea and now manufactured in Australia with a complete revamp it has grown up to be an impressive car that rivals the others in it’s class.