Home > Customer Service > News Updates > 2014 Articles > GM's Self Drive Cadillac
Articles about self-drive and vehicle-to-vehicle communication systems are now turning up in the news everywhere. We read that General Motors plans to take its first step toward an autonomous vehicle within the next two years. They plan to introduce technology that will allow their cars to connect and share information with each other and are starting with a new Cadillac that can also steer itself on the motorway. However the technology is not yet to the point where the driver can check out altogether.

This technology will be standard on the new 2017 Cadillac Sedan, controlling the cruise mode, acceleration, braking and the steering as it powers down the motorway. With GM working hard to catch up to Ford’s global program we are sure this will impact on the future for cars sold by GM in Australia and New Zealand. The talk is that the concept car known as the ELMIRAJ, first shown in 2013, will be the model equipped with this technology, although GM haven’t confirmed this yet.

GM’s Chief Executive Office, Mary Barra attended the 2014 Intelligent Transport Systems World Congress in Detroit recently with other automotive industry leaders focusing on the autonomous vehicle technologies that are starting to emerge. She mentioned that no other suite of technologies offers so much potential for good and that it was time to turn that potential into reality, although a full driverless car is still a long way away. From what we read it looks like GM is seeing this as a key platform for their business. Maybe not quite as geekish as Google’s development of a beta vehicle that doesn't have a steering wheel.

This 2017 Cadillac will be equipped with a radio transponder that sends safety messages to other vehicles armed with compatible technology, information about vehicle speed, distance and trajectory. The main objective here is to avoid crashes and reduce traffic congestion. The system will have a range of 300 meters, talk to other similarly enabled vehicles and alert the driver to any approaching threats so the correct action can be implemented. So really it’s all about safety and economy.

GM's announcement comes a few weeks after the American National Highway Traffic Safety Administration gave automakers notice of its plans to establish regulations for vehicle-to-vehicle communication technology. They are estimating that the system would add $300 to the manufacturing cost of a vehicle. Integrating this technology into the 2017 Cadillac Sedan will help GM compete with the Mercedes S-class, which is already adopting a suite of early-stage autonomous driving technologies. Nissan's Infiniti luxury division and Hyundai's luxury models along with others are offering sophisticated stop-and-guide technology but GM is the first to pledge vehicle-to-vehicle communication in the near future. 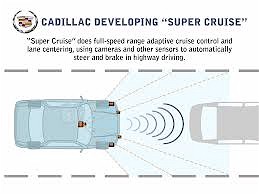 The super-cruise system has been under development for a number of years and reflects a step ahead of the adaptive type cruise control, which accelerates and brakes on the highway but does not steer the vehicle. GM's director of active safety electronics said that the super-cruise system would be able to navigate stop-and-go traffic jams. However it will still require drivers to pay attention to the road.
October 2014