Home > Customer Service > News Updates > 2014 Articles > The Last Ford Falcon
Ford is planning a public unveiling for the 2015 Ford Falcon next month in Melbourne.
As we know, the new Falcon will be the final model of the famous Australian nameplate doomed to die with the closure of Ford Australia’s factory in October 2016. This last Falcon will be on sale some time in November this year. 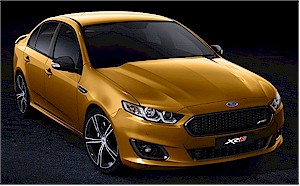 Ford has acknowledged that the last Falcon will carry the current car’s FG model code. It will be known to us as the FG X model, following on behind from the Falcon FG that has been on sale since 2008.

From the rear view it seems to look very similar to a Jaguar XF sedan. The Falcon FG X has a silver horizontal strip extending into clear segments of the rear lights that help highlight the car’s width. New bumper treatments include a wide diffuser facade that varies between models. Sporty packages such as the XR6 have a chrome-finished exhaust tip while the subdued G6E has a hidden tailpipe.

Falcon fans are starting to endorse the styling of the last Falcon FG X. According to Ford it will provide a strong visual link to the models of the future. This link will be seen in the updated Ford Mustang, Focus, Mondeo and the Australian designed and engineered Everest SUV.

The Ford Falcon XR8 will be the star of the unveiling at an event called Outside the Oval, it’s an art and design expo created by the staff at the booming Ford Australia-based Design Centre for the company’s Asia Pacific region. It will be the first sanctioned public appearance of the car. The public debut of the Falcon XR8 showcases Ford’s global design DNA with signature six-sided grille, chiseled headlight treatment and smoother wrap-around taillights featuring LEDs.