Home > Customer Service > News Updates > 2014 Articles > GM Recall Failure
Stories in the media about death on our roads happen somewhere around the world every day. However when you see a story like this you hardly seem to notice and the cause is often put down to alcohol, poor driver ability or speed. It’s almost the last thing you would expect to find that an ignition system was faulty and the company responsible for the switch decided not to own up or at least until now.

This story happened in 2006 when 3 young girls were involved in a fatal car accident in the US and investigators noted that the car’s ignition switch was in the accessory position rather than the run position. How did that happen and what did that mean, was the question at the time.

The answer didn’t come until this year. Accidents happen on the roads all the time but the girl’s families could not figure what really transpired. They knew that the car shut off within five seconds of the crash and the steering wheel locked up. The girls were returning home in from shopping in 2006 driving a 2005 Chevrolet Cobalt when the vehicle suddenly lost all power and steering. It hit a raised driveway and went airborne for nearly 12 meters before slamming into a telephone pole and two trees. The airbags failed to deploy and none of the girls were wearing seatbelts.

The steering wheel held one of the girls back. She was seriously injured but survived, however she had no memory of what happened in the moments before the accident. The other two girls did not survive.

Engineers found that under certain circumstances, the switches can cause the engine to stall unexpectedly and shut down all electrical power, which disables the air bags and locks up the steering.

How could this happen?
Well according to media reports we have read that an engineer working for an attorney on a different incident where a woman was involved in a fatal crash driving a Chevrolet Cobalt found that after close examination of the ignition system GM had changed two internal ignition parts to make them slightly bigger. The changes make the ignition key less likely to slip from the run position to accessory position in the ignition while a vehicle was being driven. 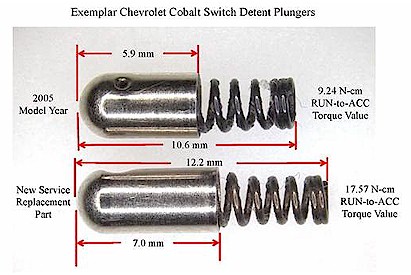 In the wake of the recall, GM officials have admitted that the company knew about ignition switch problem for more than 10 years. GM engineers pointed out the problem with stalling while doing preparation work on the 2005 Chevy Cobalt and suggested solutions to fix that issue. GM issued service bulletins to dealers in 2005 and 2006, but no recalls were issued until this year. Dealerships continued selling these vehicles despite receiving those service bulletins.

GM is reported as saying that the company will do what's right for customers. However there is news of a lawsuit filed against GM on behalf of these girl’s families. The lawsuit will claim that the faulty ignition switch was to blame for the accident. It will become a test case that could establish whether GM can be held liable for this incident or any other incident that happened before GM filed for bankruptcy in July 2009 and then emerged as a new company after that.

Under the bankruptcy rules in the US the New GM will be liable for safety recalls and repairs related to GM vehicles but not for claims resulting from accidents or incidents that happened before the bankruptcy.

The lawsuit will name GM and the local Chevrolet dealership that sold the vehicle. A bankruptcy attorney, who has worked on the case, said the lawsuit would argue, in part, that the old GM deliberately committed fraud when it filed for bankruptcy by falsely representing that the company didn't know of any product liability cases that might be brought against the company.

The Old GM had a responsibility to issue a recall when it became aware of the safety issues. The New GM takes over that responsibility when it emerged from bankruptcy, but covered up the defect. GM may deliberately have kept the defect a secret from the public for financial reasons as it was going bankrupt. A recall could be $200 million to $300 million in itself. Adding in the cost of lawsuits, the company could have been looking at $500 million in costs according to reports in the media.