Home > Customer Service > News Updates > 2014 Articles > Ford's Self Drive Future
Is it realistic to think you could one day program your car’s computer system and expect to be driven safely without touching the wheel, brakes or accelerator? 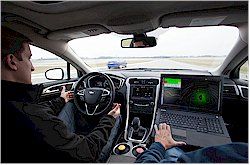 Well Ford US have embarked on that very scenario. They have been in talks with a couple of hi tech university research centers to overcome the barriers and have a solution to the market within 6 to 10 years. Ford is saying that this technology will move in stages. Its current vehicles can self-park, self-drive in slow-moving traffic and redirect drivers to avoid heavy traffic.

The next step is vehicles communicating with one another, allowing them to link up and travel together to ease congestion. The final step would see fully autonomous self-drive vehicles.

Of course we are already seeing vehicles fitted with sensors and cameras but currently it’s still a partnership between man and machine. We still need to have a current licensed driver behind the wheel and we can’t see that law changing anytime soon. 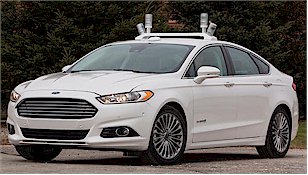 The idea behind this concept is for the computer system to build real-time 3D maps of the current environment from the information coming in from the sensors and cameras. Ford are saying that they are developing advanced algorithms that will predict what the vehicle may encounter ahead with obstacles moving objects, vehicles and pedestrians as you move toward your destination.

Can’t quite get our heads around vehicles being filled with unlicensed drivers and passengers where no one knows how to drive. It hasn’t happened with airplanes even though they can fly themselves, will it happen with cars? If an advanced algorithm can enable a vehicle to park on it’s own then maybe this could be the future.

Think about it, how cool would it be to jump into the car in the morning and have it drive you to the office while you check out the morning news. Then you are dropped off at the door and the car goes off to park its self, lock up and set the alarm in the work carpark.