Home > Customer Service > News Updates > 2014 Articles > Final Commodore V8's
Currently the Holden VF Commodore SS is sold with the 270kW 6.0-liter V8. So Holden will struggle, as the sun sets on this famous model, to compete with the more powerful engine of the Ford Falcon XR8. The Falcon has a supercharged 5.0L V8 engine under its bonnet producing 335kW. 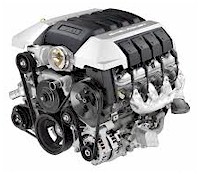 With the death of the Commodore after 2016, Holden has to act fast to make sure its rear-wheel-drive sedan finishes on a strong and powerful note. Therefore General Motors plans to ship its 6.2L, LS3 V8 for Holden to use in the 2016 Commodore SS.

Variations of the 6.2-liter LS3 are already being installed in the HSV Club-Sport and the Chevrolet SS models at the Australian manufacturing plant, so installing the 335kW engine under the bonnet of the other Commodore models should be straight forward enough.

Once the Holden Commodore SS receives the LS3 V8 engine, output would likely raise closer to 320kW about the same as the Chevrolet SS. However there are two other more powerful versions of the naturally aspirated LS3 V8 engine in Australia. The SV LS3, available in the HSV R8 Commodore, has a high flow exhaust and other upgrades to produce close to 340kW, while the previous generation R8 LS3 available in the current HSV Club-Sport model produces around 325kW.

Bringing these more powerful LS3 V8 engines into play for Commodore would put output of the 2016 SS closer to that of the supercharged XR8, however it will most likely force HSV to revamp their product lineup to offer more performance than any standard V8 Holden Commodore.