Chaz Mostert and co driver Paul Morris took their Ford Falcon from last spot on the grid to first place on the podium in the 2014 Bathurst 1000. No driver in the entire history of the race has ever won from further back than 19th position. This was Mostert’s second attempt at the famous race. 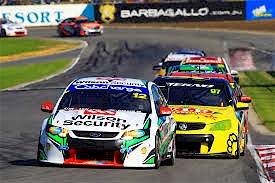 The pair qualified their Ford Falcon V8 Supercar in 26th position, the very last spot and when the race began the car slowly made its way through the field until on the last few laps Mostert was tail gating Jamie Whincup with just 4 or 5 laps to go.

The race was not without its dramas as it was red flagged with 100 laps to go, officials needed a good hour to repair the track before racing could start again. After the race was resumed, two more safety cars were called in before the midway point of the 161-lap contest, before it was called out again after 127 laps.

The fuel issue was a real concern for the pit crew as Whincup looked to hold off the threatening Mostert. He was working to force Whincup into using as much fuel as possible with just four or five laps to go.

With three laps remaining, Whincup had a three-second lead on Mostert as the pit crew radioed Whincup to conserve his diminishing fuel levels. Whincup seemed to respond to the crew on the penultimate lap to slow down and with just over one lap to go Whincup's crew informed him he had only one lap's worth of fuel left in the tank.

These proved costly for Whincup as Mostert, with extra power and fuel reserve, went through the gap and on to win the race and take the top spot.