Home > Customer Service > News Updates > 2014 Articles > Imports into Australia
We are clearly coming down now to the last models of Australian made cars we will ever see. Holden has the Commodore and Cruze, Ford the Falcon and Territory and Toyota the Camry and Aurion.

The Australian government has commissioned a report to bring recommendations once these models change from being Australian made and are then replaced from elsewhere.
Ford by October 2016 and Holden and Toyota by the end of 2017. Basically they are saying that the government should remove all the current import restrictions around second hand cars.

You will then see a new market begin for imported second hand cars competing directly with new vehicles however there will be some stringent rules applied.
Restrictions will not start until manufacturing is totally finished and some of the recommendations are as follows:
Vehicles must be less than 5 years old.
Vehicles to comply with all the current Australian design standards.According to a government spokesperson there is no intention for Australia to become a dumping ground for old second hand vehicles.

This report also comments on some other global automotive changes and trends: 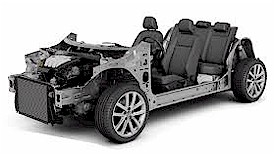 The platform is what each vehicle is built on. A vehicle platform consists of the chassis, the floor, suspension system, front axel, rear axel and the engine bay components. As an example General Motors are planning to reduce their platform offering currently standing at 30 down to 14 by 2018. Ford has already completed its reduction back in 2007 reducing from 27 down to 14 currently. Ford plan to cut that in half by 2017.

The Australian new car market is very small in global terms but has a large variety of new vehicle imports making the market fragmented and this has only gotten worse over the last 10 years. In 2013 there were 66 vehicle brands competing for the one million vehicle sales, compared with 56 brands in 2003. The US and regions like Europe, have a similar number of brands and models competing for annual sales of between 16-18 million units.

Because of the shear number of brands competing in the market the three highest-selling models in Australia only achieved sales of 40,000 units combined in 2012. While some Australian-made models are in that highest selling group in Australian, their total sales volumes are always going to be low making it impossible to be profitable.

Australian consumers do benefit from this highly competitive new vehicle market. They have greater choice, and competition encourages lower prices, improved vehicle quality and more extras for a new vehicle in a particular market segment. However, the fragmented market makes it impossible for vehicle manufacturers operating in Australia to achieve an internationally competitive scale of production on the basis of supplying the Australian market alone. So if you can’t sell more or reduce costs then the only step left is to finish up and that is what will happen.