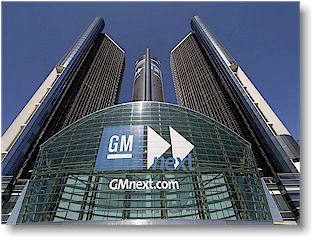 The week ending Friday 17 February 2012 General Motors announced a better than expected full-year profit. Not only is it a profit after so many losses, it’s a record and it’s on the back of some excellent sales growth in the United States and China. This growth has helped the company snatch back the number one spot from Toyota for the world's largest automaker.

This is just two years after receiving the massive US Government bailout and being dragged through the humiliation of a bankruptcy. GM executives are predicting even more profits to follow. The full-year profit is up by 62 per cent in the year 2011 to reach an impressive $7.1 billion, beating expectations and breaking records for the 103 year-old company.

The vehicle maker, whose brands include Holden, Chevrolet, Cadillac and Isuzu, said it would be making bonus-sharing payments of up to $6,500 to its US workers.

These profits appeared to provide some further evidence of the success of the US President Barack Obama and his controversial and some times unpopular bailout package for both the carmakers General Motors and Chrysler. This bailout was worth around $74.4 billion of US taxpayer dollars.

Someone unlikely to benefit from the General Motors profit turn a round is the current presidential hopeful Mr. Mitt Romney. He is in a bid to win over the White House from Mr. Obama later in November this year. The Republican candidate has in the past slammed the bailouts as "crony capitalism on a grand scale", saying that these iconic carmakers should have been allowed to fail taking the jobs with them, something President Obama just didn’t want to see happen.

Meanwhile the GM chairman and chief executive Dan Akerson has been delighted with the result and turn a round. He went on to say, “We grew the top and bottom lines, advanced our global market share and made strategic investments in our brands around the world”. He was also very upbeat about the outlook for the rest of 2012 talking about continued profits.

GM has reclaimed its 70-year reign as the best selling and biggest global carmaker. A position that Toyota has held for the last few years.

However it’s not all plain sailing, there are still a number of storms for General Motors to get through yet. The company is struggling in Europe and Latin America as these markets are under pressure from the continuing debt crisis. A loss in both the European and Latin American regions has accelerated in the final 3 months of 2011, with a deficient that is close to $550 million in Europe alone.

In a statement to reporters, Mr. Akerson said General Motors would reduce vehicle production in Europe but did not offer any final details.

However investors have been encouraged with the final profit results, causing the share price to drive up by more than 9 per cent. It finished the session last week at $US27.21 and remains around the mid $27.00 mark this week as well.

As a foot note the US Government still owns a 26 per cent share holding in General Motors.


What’s happening in Australia with General Motors and the Holden Brand?


Well Holden has enjoyed a very strong January 2012 sales result, with good performances across a their range of local and imported passenger and SUV vehicles. According to the official VFACTS figures released recently by the Australian Federal Chamber of Automotive Industries, Holden sales have increased by 8.1 per cent compared to January last year (2011). This is well ahead of the market that is currently running with a 4.3 per cent growth.

General Motors Australia has sold a total of 9061 vehicles for 11.8 per cent market share. The Holden Cruze has led Holden sales for the first time ever, with 2,445 sales for the January month and 13.1 per cent share of the small or compact car market.

Cruze was closely followed by Commodore, which sold 2170 units in January for 49.7 per cent of the larger car segment. Holden’s seven-seat Captiva 7 kicked off January 2012 as the second best-selling large SUV with 997 units and 13.8 per cent market share. Its Captiva 5 stable mate also put in a strong performance with 662 vehicles sold.

In only its third month of sales, the new-generation, new look, Holden Barina Hatch contributed an excellent result of 1,318 units and a healthy 13.8 per cent share of the very competitive light car segment.

The Holden Director of Sales, Philip Brook said, “although January was traditionally a quieter month, recently introduced models like the Series II Captiva, Barina and Cruze Hatch were proving hot property for Holden sales”. He went on to say that “Holden’s product renaissance is really picking up pace and key models are notching up very pleasing performances in their respective segments, we’ve got more exciting and diverse products in the pipeline, beginning with a new Barina sedan, which goes on sale this month. The sedan will add a new element of flexibility and choice to our Barina line-up, which is already a strong performer for Holden.

As we speak, Holden experts are putting the finishing touches on the all-new Colorado light truck, and we expect it to be a serious challenger in the Australian light commercial market. We’ve got a fantastic story to tell about our new mono-fuel LPG Commodore, which will offer customers large vehicle practicality and reduced running costs, as we roll out the new LPG model line-up in the coming weeks.
Holden’s focus continues to remain on building and selling the cars Australians want to buy and with a raft of new models due in the coming months, we’re looking forward to an exciting year (2012) ahead.”


Are these the signs of recovery for the Automotive Industry? It’s somewhat hard to know but is it sure good to hear some good news coming out from an industry that has been in some trouble for some time.