Home > Customer Service > News Updates > 2012 Articles > The "One Ford" Program
Any development of the Ford Focus RS hot-hatch has been put on hold as Ford concentrates on completing the full range of models that are being produced off the Focus platform as part of the “One Ford” program.

Ford is looking to produce up to 11 different vehicles using the Focus platform, including a mix of Focus models like the Focus Electric car and others like the Kuga compact SUV.

The new Ford Focus RS once it does come into view will produce more power than the old model that offered 224kW of power from its 2.5-litre five-cylinder turbo engine. 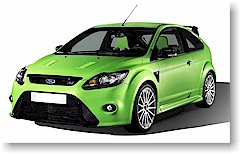 All these 11 various models will account for nearly two million units each year in global vehicle sales once they are on the road. So it’s understandable that Ford’s vehicle line director for small cars says that the company will need to determine the technological and performance direction for the new Focus RS.

Ford is not working on a new Focus RS right now. It’s just because they have other priorities to clean up and effectively they have to make a final decision on how to proceed with the new RS. Ford is working on the Focus ST launch which takes place in May this year, most derivatives should be on road by May, with the Kuga in October, then the electric Focus, so it’s a very busy period for Ford right now.

Ford is still keen to avoid using the heavier all-wheel drive hardware underneath the car, saying it can continue using its distinctive Revoknuckle front suspension that works in conjunction with a limited slip differential to help reduce torque steer. This relates to the steering wheel wrenching effect that can occur when lots of power is sent through the same wheels that are steering the vehicle.

The Ford Focus RS is now discontinued globally, with Australia receiving the last 300 units of production during 2010.

Driving enthusiasts shouldn’t be too disappointed about the Focus RS delays. Ford is saying that the new Focus ST will be better to drive anyway than its predecessor, which was badged as the Focus XR5 Turbo.

The new Ford Focus ST, which will retain its European badge for Australia and New Zealand this time around when it arrives towards the end of the year, uses a 2.0-litre turbocharged four-cylinder engine with 184kW of power on board.

Well Focus is here to stay and we will be seeing it in many different forms, you would have to say that it’s future looks good.

Tell us what you think of the Ford Focus.